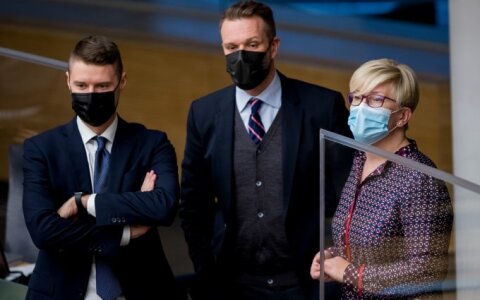 The ruling Homeland Union–Lithuanian Christian Democrats continues to top popularity rankings and the opposition Lithuanian Farmers and Greens Union holds onto its number two spot, but the gap between the two parties is widening, the latest opinion poll by Spinter Tyrimai showed on Tuesday.

Some 18.9 percent of respondents said in January they would vote for the conservative Homeland Union, compared to 11.2 percent support for the Farmers and Greens, according to the poll published by the Delfi online news site.

Mazvydas Jastramskis, a political scientist, says the conservatives have been extending their lead over the Farmers and Greens in recent months because of voters' continued confidence in the new government.

"The Farmers were more or less on par with the conservatives in opinion polls in September. The gap between them has widened quite clearly now," he told Delfi.

The Liberal Movement ranked third in the latest poll with 8.8 percent support, followed by the liberal Freedom Party with 8.2 percent and the Social Democratic Party with 5.9 percent.

Further down the list was the Labor Part with 4.2 percent, followed by Electoral Action of Poles in Lithuania–Christian Families Alliance with 2.9 percent.

Spinter Tyrimai polled 1,013 people aged between 18 and 75 years on January 18-27, 2021. Half of the respondents were polled by phone, and the rest online. The results of the poll have an error margin of 3.1 percent.