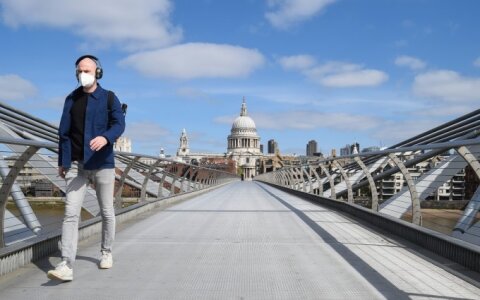 Lithuania's chief epidemiologist Loreta Asokliene says the more contagious British variant of the coronavirus could have arrived in the country and began to spread here back in November, but the strain is not dominant.

"There could've been a risk of it arriving in the autumn, possibly in November," the epidemiologist told BNS on Tuesday. "It's very likely that there were more such cases, but too little genome sequencing was done to identify them."

"(The strain) makes up a part of all cases, but I don't think it's dominant. If it were widespread, we would have found it," the epidemiologist added.

Given the easing of lockdown restrictions and the faster spread of the British variant, epidemiologists are considering tightening the rules for wearing face masks indoors, according to Asokliene.

"Taking precautions indoors is key. We should stop wearing these fabric masks or shields. I understand that they’re more comfortable to wear. It's easier to breathe and glasses don't fog up. However, we must wear proper (face coverings) and (wear them) correctly," she said.

Asokliene admitted that epidemiologists were concerned about what impact the easing of lockdown restrictions and the spread of the new strain might have on the epidemiological situation.

The Health Ministry confirmed on Monday that a woman from Vilnius had been diagnosed with the British variant of the coronavirus in early January.

The National Public Health Center (NPHC) said the women had contracted the mutated strain of the virus after contact with a family member.

The family member, who was diagnosed with the virus in late December, said they had not travelled abroad recently or had contact with anyone who had returned from abroad or tested positive for COVID-19.

However, the chief epidemiologist does not link the British variant to a spike in infections in Lithuania at the end of last year, saying that the number of positive cases began to rise much earlier.

The women's sample was for sent for sequencing to a laboratory in Rotterdam after the molecular test result raised suspicions, she said.