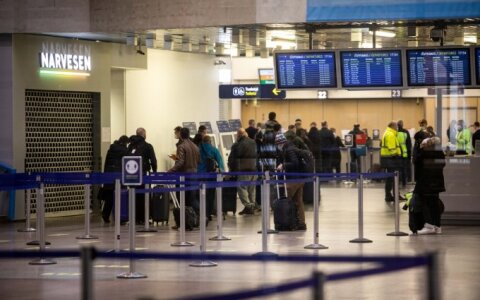 A governmental commission vetting deals by strategic enterprises has this week concluded that the deal runs counter to national security interests and will now submit its conclusion to the Cabinet.

"The commission will submit the conclusion to the government," she added.

The commission based its decision on "confidential information provided by the authorities".

It was LOU and Laurynas Kasciunas, chairman of the parliamentary Committee on National Security and Defense, who asked the governmental commission to look at whether the Chinese investment was in line with Lithuania's national security interests.

Kasciunas then warned that Nuctech's screening equipment at airports can collect data on passengers and baggage, which would be available to Chinese intelligence and security services under Chinese law.

Under Lithuanian law, the operator of the international airports in Vilnius, Kaunas and Palanga is on the list of Category I enterprises of importance to ensuring national security.

The Wall Street Journal reported last June that US agencies had launched a campaign agent Nuctech's operations in Europe.

"A campaign led by the National Security Council and a handful of US. agencies is trying to rally European governments to uproot Nuctech Co., a well-connected Chinese state-controlled company whose screening systems for cargo, luggage and passengers are becoming a fixture at ports, border crossings and airports across Europe," the newspaper wrote.

Critics say that Nuctech's "extreme low-level pricing strategy" suggests that its motives are not commercial but rather "an interest to control strategic EU infrastructure and data driven knowledge", according to the article.

Lithuania's intelligence agencies warned in a report last year that "China’s pursuit of technological advantage and its penetrating investment activities increase the vulnerability of other states and pose the risk of losing control over the critical infrastructure".

"The decision shows that Lithuania has decided not to be part of the technosphere being created and controlled by China," he told BNS. "Investments and purchases in strategic sectors must meet the transatlantic security criteria."