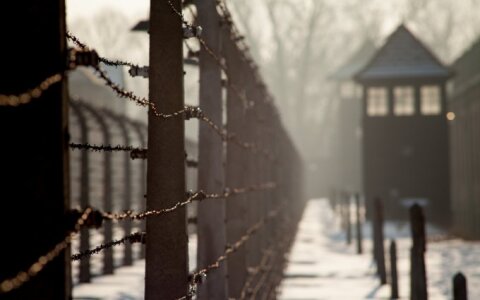 Yossef Levy, Israel's ambassador to Lithuania, has described conservative MP Valdas Rakutis' remarks on the Holocaust as "insensitive" and "disturbing".

The diplomat's comment came in response to an article published by Rakutis on International Holocaust Remembrance Day in which the chairman of the parliament's Commission for the Cause of Freedom and the National Historical Memory mentioned Jews' alleged collaboration with the Nazi and Soviet regimes.

"We say in Hebrew: if one man throws a stone into a well, 100 strong guys can't dig it up. I don't know Mr. Rakutis. Maybe he had good intensions. But this article, written especially to the Memorial Day, was unfortunately so insensitive and disturbing, and damaged the image of Lithuania," Levy told BNS on Wednesday.

"This is sad for me after so many great people made such personal effort to show respect to the victims!" the ambassador said, referring to the attention shown by the speaker of the Seimas, the prime minister and the foreign minister.

"How can you, even indirectly, blame Jewish babies and mothers butchered in thousands in mass graves that they had sympathy to Stalin? No more shame? Jews were also deported to Siberia," he said. "I feel really sad and disappointed to read such a text, especially today. No good service to our common story."

In his article, Rakutis, a member of the conservative Homeland Union–Lithuanian Christian Democrats' parliamentary group, wrote, "But what about these helpers? Who are the people who adopt terrible ideas? Are they the leaders of the Lithuanian people such as the first volunteer Kazys Skirpa or Generolas Vetra (Jonas Noreika)? Or maybe Antanas Smetona? Despite the great uproar of recent years, it was never proved that they organized the Holocaust. No, these are completely different people, often uneducated, inclined to feel important with a gun in their hands, sometimes severely affected by the 1941 Soviet repression, sometimes blindly following orders."

"Let’s get to know them; let’s understand why they did so. After all, there was no shortage of Holocaust perpetrators among the Jews themselves, especially in the ghetto self-government structures. We must name these people out loud and do our best to ensure that there are no people like them again. But (we) also (have) to answer the question of what were the views of the Jews themselves, what ideas led some Jews to collaborate with the Soviet authorities (and) hold important positions in repressive Soviet structures. Sometimes the understanding of the causes allows one to understand the consequences, although it does not justify the actions."

Foreign Minister Gabrielius Landsbergis, the leader of the Homeland Union–Lithuanian Christian Democrats, said he was outraged by Rakutis' remarks, stressing that they do not reflect the position of the party or the government.

The Nazis and their local collaborators killed over 90 percent of Lithuania's pre-war Jewish population of more than 200,000 people after Germany occupied the country during World War Two.

More than 900 Lithuanians have been named Righteous Among the Nations by Israel for risking their lives to save Jews.