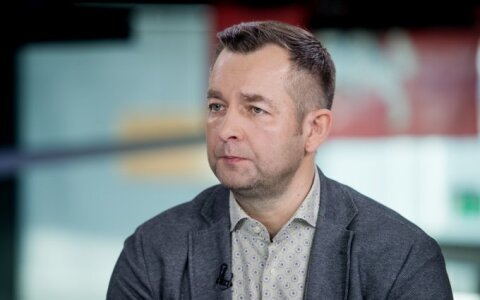 Following the president-initiated Foreign Affairs Coordination Council's meeting in the middle of January, Asta Skaisgiryte, the president's chief advisor on foreign affairs, said that "Lithuania's long-term strategy on the Belarusian issue should be drafted". It should be viewed as recognition that Lithuania's policy towards Belarus has not been effective.

After assuming the president post following the 2019 election, Gitanas Nauseda started changing Lithuania's previous tough policy towards Belarus, demonstrating his wish to step up political cooperation with Minsk. It seemed to be the right time for that amid higher tensions between Belarus and Russia, which was also viewed by Lithuania's partners, the US and the EU, as a chance to try and bring Belarus closer to the West.

The new president was also looking for a niche to do something different from his predecessor Dalia Grybauskaite. But this attempt of his ended up the same way as the move of the then President Grybauskaite early in her presidential term in 2009-2010 towards pragmatic relations with Alexander Lukashenko but with a more visible contrast between the Lithuanian president's calls for Lukashenko and everything that's been happening in Minsk's streets for around the past six months.

Lithuania's policy towards Belarus needs deeper consideration not only because it's not been yet effective so far in terms of the situation in Belarus. Lithuania has been the most active EU member state on the Belarus issue, also proposing incentives for Lukashenko to end violence against the country's residents and turn to the West, and – especially after the rigged election – also proposing sanctions for the official Minsk, as well as assistance to opposition activists and Belarusian seeking changes. In this regard, Lithuania is not only helping residents of the neighboring country who no longer want to live in a system based on violence and lies, but is also seen within the EU as a state seeking the consolidation of democratic values in the neighborhood. In diplomacy, the activity itself is considered an objective to be attained.

Activity, however, also highlights the weaknesses of such a policy and major challenges. Out of them, the key probably is a lack of coordinated action by Lithuanian institutions and stalling common EU decisions on Belarus. Since foreign and internal policies are closely related in the modern world, internal policy, strategic planning and coordination are key in terms of foreign policy efficiency. Lithuanian institutions' reaction to the freezing of the accounts of the Druskininkai-based Belorus sanatorium following the third round of EU sanctions for Belarusian officials reflects poor preparation to manage economic and social consequences of such decisions. Such a lack of preparation could probably be partly explained by the change of government following the Seimas election last fall but there are more examples of such poor internal preparation. It could also be said about Lithuania's very stringent immigration policy which has been a major obstacle to the country's economic transformation and investments for a long time. The crisis in Belarus has further highlighted Lithuanian institution's inflexibility and slow reaction in eliminating excessive obstacles for the movement of businesses from Belarus to Lithuania. It would be great if it became a push for a review of Lithuania's business environment, which is key to the country's economic long-term post-pandemic growth.

Lithuania's policy on sanctions for Belarus is also giving rise to a dilemma between value-based principles that are stressed in the government program drafted after the Seimas election as well as the introduction of economic sanctions for state-owned enterprises, which could have a major impact on the Lukashenko regime. Do the continuous economic relations with Belarusian companies important for the survival of the ruling regime match the vision of Lithuania as a center of the development of freedom and democracy, as declared in the government program? The answer to this question is difficult as the efficacy of such (economic) sanctions would highly depend on whether other EU countries joined them. Otherwise, Lithuania's principles would cost a lot for the country's economy and their impact on the Belarusian regime would be very limited. Lukashenko has numerous times threatened Lithuania with redirecting transit cargoes and closing the border over the past six months. They remain only threats yet as it would cause loses for Lukashenko himself. But to avoid the situation when value-based principles become just plain occasional moralizing in response to human rights violations in Belarus or Russia, Lithuanian policy shapers need better consideration on when and how they are followed up. All the more so, similar issues are arising in terms of the EU-China agreement on investment and there will be even more of them in the future.

The efficacy of Lithuania's foreign policy highly depends on how its EU and NATO membership is used for the implementation of the country's priorities. We have seen the EU's slow reaction to events in Belarus as it has once again raised the issue of whether member states' veto right should be lifted in foreign policy cases like the application of sanctions and the protection of human rights. On the one hand, for Lithuania, the renouncement of the veto right would be beneficial in those areas where it seeks the whole EU's more active involvement. On the other hand, if, led by France, the EU started changing its existing policy towards Russia, and the latter failed to change its attitude towards the status quo in Ukraine and other neighboring countries, the renouncement of the veto right would be risky.

When EU decision-making is slow, the main way to respond is to pull together coalitions of individual EU member countries (also known as "willing coalitions"). Lithuania has been quite successful in this respect, responding to the crisis in Belarus and coordinating its decisions with Latvia and Estonia, and often with Poland and other EU countries, too. Less successful have been Lithuania's efforts to resolve the issue of Belarus' Astravyets nuclear power plant, which is considered unsafe, as it has so far failed to get the Baltic countries to agree on a joint boycott of its electricity. Although the presidential adviser said that Lithuania had succeeded in making Astravyets' safety a common European issue, uncertainty remains as to what Lithuania is seeking. The government's program and political discussions in the country call for seeking to prevent this unsafe power plant from operating because it is unsafe in principle (due to its improper location, for example). Meanwhile, EU bodies' proposals recommend that Belarus take measures to enhance the power plant's safety. The practical implementation of these measures would therefore only increase the likelihood of the Astravyets NPP operating and would weaken the arguments for a boycott of its electricity. Such uncertainty about the goals, previous efforts by Lithuanian politicians to find someone to blame and rhetoric of suspicion toward Latvia have so far hampered Lithuania's efforts to persuade the other Baltic countries to back its position.

Thus, the discussion between foreign policy-makers and implementers on Lithuania's strategy towards Belarus – both on the goals pursued and on various national, regional and EU level implementation measures and the assessment of the dilemmas they pose – would make sense. It would be even better if such discussion were not limited to Lithuania's policy toward Belarus, but would also look at the changing environment in Europe and worldwide and what these changes – such as the United Kingdom's withdrawal from the EU, the US focus on its domestic issues, China's growing role, global technological and economic changes that are blurring boundaries between foreign and domestic policy and politicizing foreign affairs, turning them into an arena of domestic political struggles – mean to Lithuania.

Even what is not changing – the persisting threats from the East – should be considered against the background of other changes, assessing how well Lithuania is doing in maintaining the attention and support of its Western partners and whether the country is doing its "homework", and whether it pays enough attention to the needs of its EU and NATO partners (in Southern Europe, for instance). Although Lithuania’s key priorities have not changed since it joined the EU and NATO, the effectiveness and appropriateness of the measures used must be regularly reviewed as the situation changes. Abstract discussions about whether the Visegrad countries or Northern European countries are closer to Lithuania fail to take into account the fact that different coalitions usually form in the EU on specific issues and their make-up depends on the issue under consideration and on countries' economic structure and domestic policy. Of course, in terms of values, it would be easier for Lithuania if decisions by Poland's ruling politicians did not cause so much controversy in the EU over their conformity with the rule of law. However, if Poland's ruling politicians had not isolated themselves in the EU, they would probably pay less attention to Lithuania's interests. By the way, the fact that the Lithuanian representation to the EU has been working without a permanent head for some time now is not helping Lithuania to rally support from partners on issues that are important to it.

In preparation for the Conference on the Future of Europe, the Lithuanian Foreign Ministry has initiated a number of discussions on institutional reforms under consideration in the EU, but diplomats and analysts participate in them more often than politicians. Besides, what is important is not only procedural and organizational changes in the EU, but also links between different policy areas and their coordination within Lithuania. Drawing up a new document and then forgetting it is not why strategic reflection is needed (by the way, Lithuania's European policy strategy expired in 2020). It would be the most useful as a learning process involving institutions responsible for areas related to the state's foreign affairs – economy and innovation, transport and energy, education and science, and so on – and aimed at a better coordinated and more effective implementation of the country's strategic goals. And when acting strategically, value-based principles would make more sense, too.