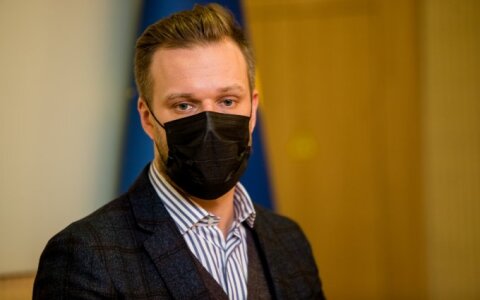 In his opinion published on International Holocaust Remembrance Day, Rakutis, a member of the Homeland Union's parliamentary group, spoke, among other things, about Jews' alleged collaboration with the Nazi and Soviet regimes.

"I, as a human being, am very angry at the lack of adequacy and understanding," the minister said in a comment sent to BNS. "The parliamentarian's opinion has nothing to do either with my position or with the principles that the party I represent or the government I work in adhere to."

Landsbergis said he had visited Paris' Shoah Memorial to pay tribute to the victims of the Holocaust as part of his visit to the French capital this week.

Related articles
Righteous Among the Nations honored in Kaunas for saving Jews
Linkevicius: the Holocaust is scar on humanity's face  (1)

"Six million Jews around the world; 200,000 in our country alone; our neighbors, compatriots, brothers and sisters. People without whom I cannot imagine the history of Lithuania," he said. "The words 'we will never forget and will not allow this to happen again' must be implanted in our hearts."

In his opinion, Rakutis, who chairs the parliament's Commission for the Cause of Freedom and the National Historical Memory, mentioned Jews' alleged role in the Holocaust and repressive Soviet structures as he called for searching for the causes of the genocide of Jews.

"But what about these helpers? Who are the people who adopt terrible ideas? Are they the leaders of the Lithuanian people such as the first volunteer Kazys Skirpa or Generolas Vetra (Jonas Noreika)? Or maybe Antanas Smetona? Despite the great uproar of recent years, it was never proved that they organized the Holocaust. No, these are completely different people, often uneducated, inclined to feel important with a gun in their hands, sometimes severely affected by the 1941 Soviet repression, sometimes blindly following orders," the MP wrote.

"Let’s get to know them; let’s understand why they did so. After all, there was no shortage of Holocaust perpetrators among the Jews themselves, especially in the ghetto self-government structures. We must name these people out loud and do our best to ensure that there are no people like them again. But (we) also (have) to answer the question of what were the views of the Jews themselves, what ideas led some Jews to collaborate with the Soviet authorities (and) hold important positions in repressive Soviet structures. Sometimes the understanding of the causes allows one to understand the consequences, although it does not justify the actions."

Rakutis, a historian by education, has in the past lectured at the Jonas Zemaitis Military Academy of Lithuania and served as an advisor to the Lithuanian Armed Forces.