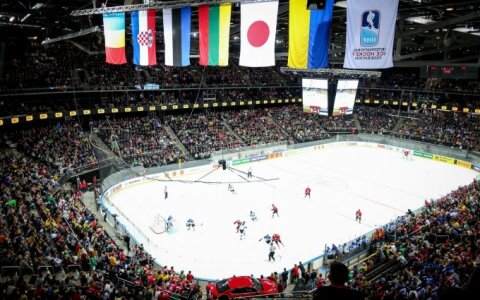 Lithuania is determined to help Latvia organize some of the games of the men’s ice hockey world championship that were due to take place in Minsk, Education, Science and Sports Minister Jurgita Siugzdiniene has said.

The minister on Wednesday discussed the issue with her Latvian counterpart Ilga Suplinska.

“Lithuania has never hosted ice hockey events of such a level and now we have a historic opportunity. It is necessary to assess this possibility and to offer specific help to Latvia,” a press release from the Ministry of Education, Science and Sports quoted Siugzdiniene as saying.

“Lithuania has already proved that it is capable of organizing top-level sports competitions. Yes, that would be one of the biggest challenges in the history of our country’s sports,” she noted.

According to Siugzdiniene, Latvia’s minister “appreciated such a possibility and thanked Lithuania for its proposal”.

The 2021 Ice Hockey World Championships is scheduled to take place between May 21 to June 6.

The International Ice Hockey Federation (IIHF) said on Monday that its council had decided to move the 2021 IIHF Ice Hockey World Championship from Minsk "due to safety and security issues that are beyond the IIHF’s control".

The body said the decision was "unavoidable" in the face of "the growing safety and security concerns related to both the rising political unrest and COVID-19".

Belarus had been due to co-host the championship with Latvia. However, the Latvian government has indicated that it does not want to co-host the tournament with Belarus, as the regime of authoritarian leader Alexander Lukashenko has been conducting a violent crackdown on peaceful protesters in the country.

With Minsk/Riga 2021 being a joint bid, the IIHF Council must now consider the status of Latvia as a co-host, and will also evaluate the possibility of moving to a single-venue format to facilitate COVID-19 safety regulations and team travel.

Belarus has been engulfed in massive protests since Lukashenko claimed a landslide victory in the August 9 presidential election which the opposition and Western countries say was rigged.