Lithuania calls for EU sanctions against Russia over Navalny’s detention 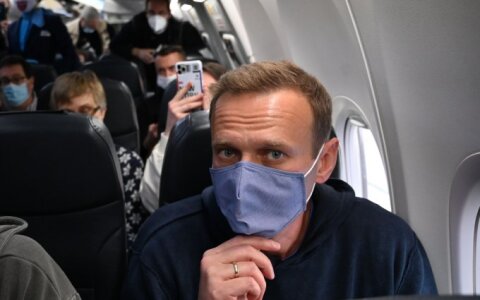 “Lithuania will immediately raise issues concerning the EU's possible response to the detention and persecution of Navalny, and new sanctions against Russia,“ he said in a press release.

“Navalny’s detention is totally unacceptable. We call for his immediate release. The EU should act swiftly and, if he is not released, we shall consider restrictions that should be introduced in response to this appalling deed,” he wrote on Twitter on Sunday night adding that this was a common stance of the Baltic countries.

The Foreign Ministry pointed out in the press release that Russia’s decision to detain Navalny undermined the general principles of the rule of law recognized by civilised nations, and violated the human rights norms enshrined in the Council of Europe's European Convention on Human Rights.

“Lithuania's Foreign Ministry believes that the actions of the Russian law enforcement agencies are a part of the Moscow-initiated official persecution and liquidation campaign against Navalny. As seen through Moscow's eyes, it seems that Navalny, who dared to challenge the government, has made another most unfortunate mistake. He has survived. More than that, he has said who was behind the attempt on his life,” the press release quoted Landsbergis as saying.

“The appalling arrest of Russia’s opposition leader Navalny right after his return home is yet another proof of Kremlin’s efforts to systemically abuse human rights and democratic freedoms. Western democracies shall not tolerate that,” Nauseda wrote on Twitter.

“If anyone still had any illusions about Kremlin’s common sense, they should have disappeared now when the whole world is watching a broadcast from Sheremetyevo,” Simonyte wrote on Twitter.

Police detained top Kremlin critic Navalny on Sunday when he flew back to Russia months after barely surviving a poisoning attack.

Navalny was detained at Moscow's Sheremetyevo airport less than an hour after he flew in from Germany, where he had been recovering from the poisoning with a nerve agent he says was ordered by President Vladimir Putin.

Russia's FSIN prison service later said in a statement that it had detained Navalny for "multiple violations" of a 2014 suspended sentence for fraud, adding that "he will be held in custody" until a court ruling.

The FSIN said it had previously warned Navalny he would be arrested for failing to meet probation conditions while in Germany, including that he check in with the service twice a month.

Navalny fell violently ill on a flight over Siberia in August and was flown to Berlin in an induced coma. Western experts concluded he was poisoned with Soviet-designed nerve toxin Novichok.

The Kremlin denies any involvement and Russian investigators said there were no grounds to launch a probe.

Lithuania calls for EU sanctions against Russia over Navalny’s detention