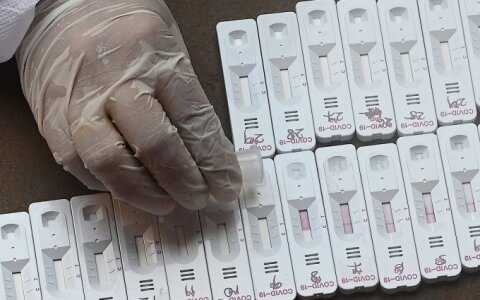 The Lithuanian Prosecutor General's Office said on Thursday it has filed a public interest action seeking more than 4 million euros in damages for rapid COVID-19 tests.

The Prosecutor General's Office says the state heavily overpaid for rapid tests purchased through a negotiated procedure without prior publication and seeks to recover that part of the contract value that they consider to be unreasonable.

Prosecutors from the Public Interest Protection Division have asked Vilnius Regional Court to declare null and void transactions on the acquisition of COVID-19 EXPRESS rapid tests and order companies, which are not named in the press release, to pay more than 4.14 million euros in damages to the state.

Evidence collected as part of a probe into the purchase of 510,000 rapid tests for a total of 6 million euros, including VAT, by the National Public Health Surveillance Laboratory indicate a possible violation of public interest, according to the press release.

The contract was awarded in violation of the principle of transparency set out in the Law on Public Procurement. The rule that funds allocated for the purchase of supplies, services or works must be used rationally was not followed either, it said.

As a result, the tests were bought at a price that was around three times above their real market value.

Formal suspicions against six individuals have been brought in the case, the Prosecutor General's Office said.

It was reported earlier that suspicions had been brought against Lina Jaruseviciene, who served as deputy health minister at the time the contract was concluded, as well as representatives of Profarma, the company that supplied the tests, and Bona Diagnosis CEO Redas Laukys.

Lukas Savickas, who served as the government's vice-chancellor at that time, and Jonas Kairys, an adviser on health issues to Saulius Skvernelis, the then prime minister, were questioned as special witnesses during the investigation.

The public procurement contract was signed by Vytautas Zimnickas, the then director of the National Public Health Surveillance Laboratory who passed away last July.

Aurelijus Veryga, the then health minister, was questioned as a witness in the case.

The rapid tests were purchased as a matter of urgency. The laboratory signed the contract on the same day it received Profarma's offer. The entire amount of 6 million euros was transferred to the company as an advance payment within a day.

Law-enforcement officials have said that the company could have forged documents and provided false information on the rapid test producer when signing the 6-million-euro contract.