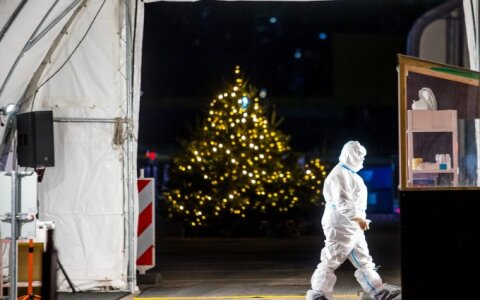 The situation around the spread of the coronavirus in Lithuania is stabilizing, the country's chief epidemiologist Loreta Asokliene says, noting, however, that the number of cases and deaths is still growing.

"We seem to have a stabilized situation or we are at least getting closer to that," she told the national radio LRT on Monday morning.

In her words, it’s hard to assess the data from the festive period yet as a smaller number of cases has to do to with smaller testing volumes, but certain conclusions could be drawn from the fact that the share of positive cases remains stable.

It would be possible to make more solid conclusions next week, she said.

"It is highly likely that the next week will show the real situation and we won't see rising numbers, or at least we'll have a more stable situation," Asokliene said.

The number of cases and deaths is still growing, the epidemiologist said, and the situation in hospitals remains difficult. The biggest number of coronavirus cases is being reported in the southern city of Alytus.

The incumbent government of Ingrida Simonyte further tightened the quarantine in the middle of December and told shops selling non-essential goods and the majority of services providers to close, also banned people from leaving their municipalities without a serious reason and banned people from more than one household to have contact. Remote education for schoolchildren was also extended.

The average daily number of new coornavirus cases in Lithuania now stands at around 2,200, based on a seven-day average. The rate stood at around 3,000 before Christmas.