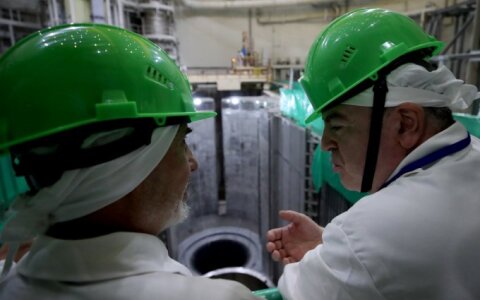 Lithuania is seeking guarantees that the planned investment agreement between the European Union and China will not undermine the blockade of electricity from Belarus' Astravyets nuclear power plant, Prime Minister Ingrida Simonyte said.

"Lithuania has no intention of blocking the signing of this agreement. The agreement will create new opportunities for EU and Lithuanian businesses," Simonyte said in a press release after discussing the course of talks on the Comprehensive Investment Agreement with European Commission Vice-President Valdis Dombrovskis earlier on Wednesday.

"However, we want it to be made clear that this agreement cannot and will not become a basis for Chinese companies to trade in electricity produced in the unsafe power plant or to look for such possibilities," she added.

Support from the European Commission is very important to Lithuania in implementing its "anti-Astravyets law", Simonyte said.

"It is Lithuania's priority national security interest and we will protect this interest by using all available bilateral and regional means and at the EU level", including by expressing its reservations about the EU's planned agreements with third countries, she said.

Simonyte asked Dombrovskis for "firm guarantees" that the European Commission will work out proposals to bar market access for electricity from unsafe nuclear power plant, as requested by EU leaders, and will do so without delay, according to the press release.

The vice-president assured the prime minister that these decisions will be made in a timely manner and that Astravyets electricity will have no access to the EU market, it said.

Lithuania is the most vocal critic of the Astravyets plant, saying that the facility located close to its border fails to meet international safety and environmental standards, an allegation that Belarus denies.