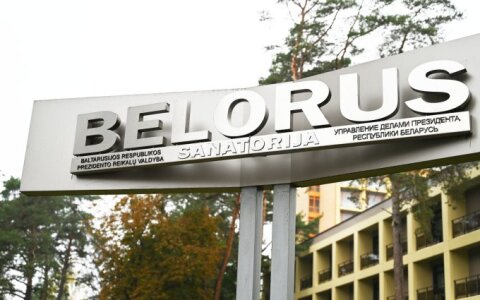 Employees of Belorus, a Belarusian state-owned spa whose bank accounts have been frozen due to EU sanctions, must understand the risks they take by getting employed in such an enterprise, the chairman of the parliamentary Committee on Foreign Affairs said on Wednesday.

Lithuanian authorities have repeatedly warned people and business about this, he added.

On December 18, Swedbank froze the accounts of the Belorus spa in the southern Lithuanian resort of Druskininkai because it is owned by the EU-sanctioned Main Economic Office (GHU) at the Belarusian president's administration.

When asked what he would do if he were an employee of Belorus, Pavilionis said, "I'd try to find a job in a Lithuanian company. This is the territory of Belarus and a company serving the Belarusian regime."

The parliamentarian added that the spa's employees, like any affected citizens of Lithuania, have the right to complain to the country's authorities.

Social Security and Labor Minister Monika Navickiene said on Wednesday that the government was working on a plan to help Belorus' employees.

The spa employs 393 people, including around 350 Lithuanian citizens.