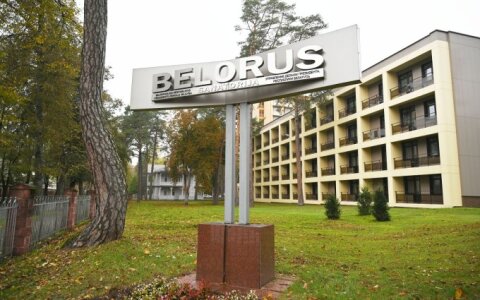 Belorus, a Belarusian-owned sanatorium in Lithuania's southern town of Druskininkai, recently hit by the existing EU sanctions, is part of the corrupt system of Alexander Lukashenko's regime, Franak Viachorka, a Belarusian opposition representative and adviser to opposition leader Svetlana Tikhanovskaya, has told BNS

His comment followed reports on Monday that Swedbank had frozen the sanatorium's accounts.

The accounts were frozen under the existing EU sanctions for the GHU – the Main Economic Office of the Administrative Affairs Office of the President of the Republic of Belarus. The sanatorium operates as a public establishment and the GHU is its stakeholder.

"Lukashenko's state has become a mafia state and many enterprises, companies, restaurants, shopping malls, private medical centers and even sanatoriums belong to this company which is called the administration of president," Viachorka told BNS on Tuesday. "This organization appeared on the sanctions list and the blockade of the accounts of the Belorus sanatorium is the result of this mafiosi structure of Lukashenko's state."

Related articles
Swedbank freezes accounts of Belarusian sanatorium due to EU sanctions  (1)
For some in Russia’s elite, Putin’s future is again a hot topic

In his words, "the only way is to disrupt, dismantle the Lukashenko state system and power vertical" to secure any change.

"We are fighting not just for free elections, we are fighting corruption. The truth is that this sanatorium is part of the corrupt system," Viachorka said.

The opposition activist also expressed his hope EU institutions would find and freeze more accounts belonging to representatives of the Lukashenko regime who are on the sanction list.

The Belorus sanatorium employs 393 people, according to the social insurance fund SoDra.

Lithuania's Ministry of Foreign Affairs says it's looking into ways to help Lithuanians working at the sanatorium.

The EU imposed sanctions for the Belarusian regime due to vote-rigging and violence against peaceful protesters. Belarus has been rocked by mass protests for five months already ever since the rigged presidential election on August 9 when Lukashenko, who has been in power since 1994, was declared the winner. The country's opposition and Western democracies consider the vote to have been rigged.

Protesters are demanding Lukashenko's resignation, release of political prisoners and a new election.

Viachorka says protests have recently moved to residential areas, adding, however, that Lukashenko's plans to hold the so-called All-Belarusian People's Assembly in February, might spark mass demonstrations in city centers.