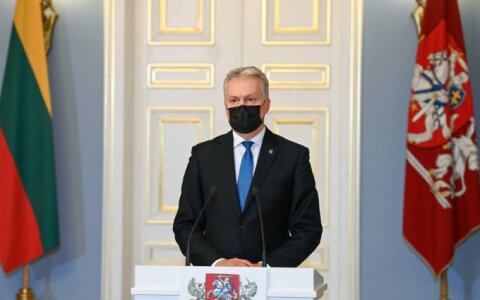 Lithuanian President Gitanas Nauseda signed the 2021 budget bill with a deficit target of 7 percent of GDP into law on Tuesday.

The additional spending earmarked in next year's budget will help the health system, people and businesses cope with the coronavirus pandemic, but it will be necessary to reduce the deficit in the future, Nauseda said in a press release.

"For four years before the pandemic, Lithuania had surplus public finances. The strong pre-crisis position now allows the country to help its health system, people and businesses withstand the challenges of the pandemic," the president said.

"However, next year's budget deficit of 7 percent of GDP must be a short-term phenomenon: temporary relief measures cannot become permanent expenditure," he added.

The coronavirus relief package totals more than 1 billion euros, with funds earmarked for downtime compensation to businesses, allowances to self-employed people and job-seekers, financial support for hospitals and other institutions involved in combatting the pandemic, according to the press release.

Nauseda also noted that the average monthly old-age pension is set to rise from 377 to 415 euros next year and described the planned increase in the universal child benefit as a positive development.

The 2021 budget, approved by the Seimas a week ago, is planned with a general government deficit of 7 percent of GDP, due mostly to additional funding for measures to contain the coronavirus pandemic.

Prime Minister Ingrida Simonyte has said the new government adjusted the draft budget to more transparently reflect the real situation, describing the widening of the deficit as short-lived and inevitable.

Some opposition politicians say it was unreasonable to raise the deficit target, warning that the rapid debt growth could make government borrowing more expensive in the long run.