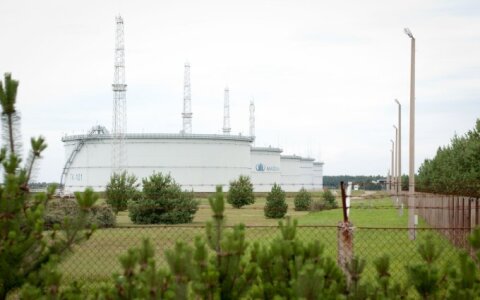 Up to two tons of crude oil spilled on Monday from the loading buoy at the Butinge oil terminal of the Polish-owned Lithuanian oil refining and import company Orlen Lietuva, the Environment Ministry said, based on preliminary data.

Environmentalists are investigating the incident, the ministry said in a press release.

A forecast by the Environmental Protection Agency shows that the oil slick is moving toward Latvia's territorial waters and is unlikely to reach the coast in the next three days, it said.

Once the amount of pollutants released into the sea has been determined, the Environmental Protection Department under the Health Ministry will calculate the environmental damage that will have to be compensated for by the terminal's owner, according to the press release.

Environment Minister Simonas Gentvilas said the extent of the environmental damage would depend on meteorological factors.

Related articles
Drones and satellites will be used to study plastic pollution in the Baltic Sea
Belarus: fish kill in River Nemunas near Grodno triggered by natural and climatic causes

"Wind and waves create favorable conditions for the pollutants to disperse and dissipate. On the other hand, low temperatures are hindering nature from coping on its own," he said in the press release.

The incident was reported to the authorities at around 10 a.m. on Monday.

The Lithuanian Navy's Maritime Rescue Coordination Center has sent a helicopter to the area to measure the size of the oil spill.

Orlen Lietuva has been importing crude via Butinge since 2006.