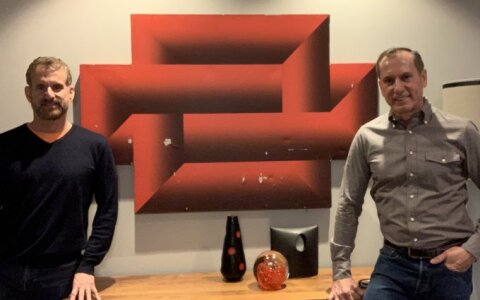 A work of art by Lithuanian famous artist Kazys Varnelis has been found in the United States after being considered lost for nearly 50 years, the National Museum of Lithuania reported on Wednesday.

According to the museum, two American collectors kept the work of art, known by the title ‘Quiz' and created back in 1973, in a garage of their home in Chicago for five years without knowing its true value.

Before that, the painting of an unusual shape was found near a garbage container.

Two weeks ago, the Americans discovered that the work of art had been created by the Lithuanian master of optical art and took to Instagram to share the story, which was read by Aiste Bimbiryte-Mackeviciene, art expert with the museum.

“The discovery of this painting is a real surprise, a quiz, nothing less than a puzzle,” she said in a press release adding that the work of art had been displayed at Varnelis’ personal exhibition in Milwaukee back in 1974.

According to the museum, Quiz may be worth more than 10,000 euros. How a work of art of such value ended up near a garbage container in Chicago remains a mystery.

The Americans do not intend to sell the painting for now but consider lending it after some restoration.