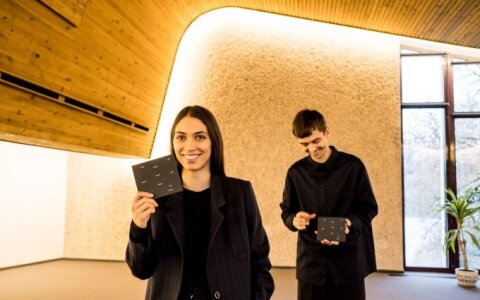 There were countless times during this conversation when our continuous exchange of questions and answers was interrupted by interjections like “Lora, what do you think?” or “Arnas, what’s your opinion?” A warm, fraternal rapport between siblings Lora Kmieliauskaitė and Arnas Kmieliauskas who form the Twenty Fingers Duo is perhaps one of the most distinctive features that characterises their performances of contemporary music for violin and cello, some of it recorded on their debut album entitled Performa, released in cooperation with Music Information Centre Lithuania.

The new release features six pieces written especially for the ensemble by different Lithuanian composers, thus reflecting the diversity of Lithuanian contemporary music scene. It was designed by visual artist Lauryna Narkevičiūtė who also created six visuals for the project based on primary ideas and conceptual outlines suggested by composers, which complemented the musical narratives recorded on the album. This unique package offers liner notes in Lithuanian and English, a CD, and QR codes for those who prefer to listen to the music online.

It also provided a good opportunity to meet and discuss how their duo changed over time; and, among other things, how they had to learn ‘anti-ensemble’ playing for one of the pieces included in Performa.

Rasa Murauskaitė: So what are you now looking for in contemporary music, what makes you prick up your ears? New sound worlds? Going to extremes? What challenges do you find for yourselves? Don’t you think it’s hard to find anything to wonder at these days?

Arnas Kmieliauskas: We are still very prone to experimentation. As I have mentioned before, we have not yet matured as an ensemble – a young formation without a fixed direction. We are eager to try out new genres, forms, techniques… We find interest in (almost) everything. Now we are preoccupied with the extended instrumental techniques and subtle shades of timbre. Certainly, many things have already been explored, tried and tested, but we want to dig into this vast field all by ourselves and look into what the future holds for us, perhaps hoping to find a clearer direction. We also aim to remain open to other media and artistic disciplines. We are drawn to interdisciplinary approaches. Nowadays it is hardly possible to express everything through the medium of music alone; thus, attempts to reflect the present-day world are more successful, at least in my humble opinion, through a combination of different media.

Lora Kmieliauskaitė: Each time I start studying a new piece I expand my horizons. And each time it feels great to meet new artists. I like attending rehearsals where I will be given a lot of questions and will be able to ask myself, and see from the very start how the seeds of a musical work germinate and grow on the palms of my hands. It feels good to be part of the process when you are struck with a feeling, at a certain point of a concert performance, that you have walked all the way and know what you have to say, that you have fathomed not only the idea behind a piece but also the personality of a composer. This interpersonal exchange between a living artist and a performer, which occurs in the process of creative work, is what I cherish the most. It stands in sharp contrast to the classical works that you rehearse from the score and feel basically alone, without any feedback. You often ask yourself, if your interpretation was right. You experience this journey all on your own… While collaborating with the composer and other artists, you come to realize what you are doing. Arnas and I often ask each other the same questions all over again; we discuss and disagree. There is no room for complacency in our work, since we are on the edge of our seats all the time. 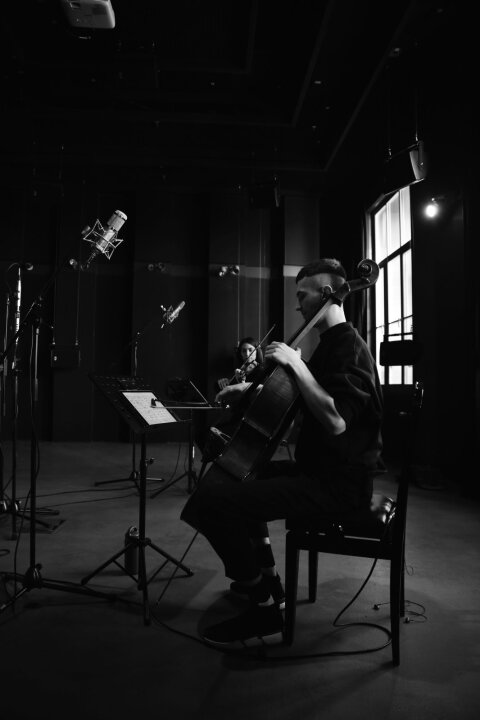 A. K.: To put it in plain terms: when we perform classical music we seem to be obliged to interpret it in our individual way. When we perform new music we can become part of a collaborative work. From being merely performers we become, at least in part, co-authors.

R. M.: Now let’s turn back to your debut album Performa. Tell us more about what the listeners will find enclosed inside. What was the context of its emergence? What pieces have you committed to disc? What made you choose these particular composers?

A. K.: Our choice probably fell on those, with whom we had or didn’t have a chance to collaborate and what we then considered interesting to try out. At the time when we began to compile this programme we had already performed quite a few works by young Lithuanian composers at various festivals and concerts and formed an opinion about them. That’s how we selected our ‘lucky six.’ All of those to whom we have extended our invitation instantly agreed to collaborate and expressed their eagerness. We had no intention to control their expression in any way because all of them are distinguished for individuality. Some use limited aleatory techniques, others demonstrate neoromantic tendencies – it is this colourful and stylistically varied array that is a major part of the appeal for us. We wanted to bring this diversity to the fore and show how broad is the range of work by Lithuanian composers. Meanwhile speaking of the context in which this album has arrived, the primary reason was quite predictable: the repertoire for violin and cello is rather scant not only in Lithuania, but in Western Europe as well; thus we aimed to expand our repertoire. We hope that by doing so we have contributed new works to the repertoires of other ensembles as well. In addition, it should be mentioned that our project Performa was initially audiovisual, developed in collaboration with the visual artist Lauryna Narkevičiūtė. Visuals add an extra dimension to the Performa, help stretch the boundaries of perception and sometimes even facilitate the understanding of music. In fact, Performa was our first project that has led us in new directions.

L. K.: It is also important to note that this programme is a dedication to Lithuania. At the time when it was in preparation, Arnas and I have been travelling extensively. Our geographical boundaries have widened substantially, while Lithuania remained so small and cute. Our wish was that the invited composers would choose some historical personality of a natural monument related to Lithuania. We sought to create a genuinely Lithuanian ‘product’ and hoped to represent the diversity of our contemporary music scene. Therefore our choice deliberately fell on both performative artists, like Arturas Bumšteinas, and more traditionally oriented composers.

A. K.: But the composers came first and only then we came up with the aforementioned idea. We have formulated the theme to provide a unifying thread, running through all these works – free enough to spark off creative impulses. As a matter of interest, Narkevičiūtė joined the project without hearing the pieces and created visuals based on their ideas. We haven’t seen the final picture of the whole project before the last rehearsals.

R. M.: Don’t you think Performa would intimidate people without any background or prior experience in contemporary music?

L. K.: I believe those who have no knowledge of contemporary music will be pleasantly surprised and roused to learn more. Even an expert assuming that he or she is knowledgeable enough in contemporary Lithuanian music may be startled by the experimental extravaganza of Bumšteinas. But no, we had no intention to intimidate our listeners while choosing works for this album.

A. K.: We have put the works in order of increasing novelty: works distinguished for the novelty of expression are placed towards the end of the album. We wished that our listeners would inure to it gradually, taking their time and short moments of repose, and only then grab the bull by the horns (laughs).

R. M.: In the beginning of our conversation you have pointed out that you have always been interested in extended techniques and novelties that you can master and add to your knowledge. Were there many things you had to learn anew while recording this album? Did you feel like making an improvement, taking a step forward, or did you draw on your prior skills and knowledge?

A. K.: It was tricky because all composers nowadays use their personal musical language and notation. Instead of using a universal system of notation, the majority of composers throughout the world invent new vocabularies, terms, systems of notation, which require a lot of time to accustom, learn to read it and react to it with appropriate fluency. It is more of a general observation. Speaking about the Performa in particular, I can conclude that difficulties mostly arose while rehearsing works by Maslekovas and Bumšteinas. The former uses a very varied, extensive nomenclature of extended techniques. We had to learn new skills physically, to improve coordination that was unusual for us, and then integrate everything within the ensemble. What seemed hardly surmountable at first now seems completely opposite to the ear – as simple as that. Meanwhile Bumšteinas includes many episodes of aleatory and improvisation. And we are not very easily induced to improvise. We had to abandon all the clichés in our minds. We had to learn a lesson that allowed us to expand the range of performance techniques.

L. K.: Arnas said it all. I can only add that it was for the first time in our lives that we had to learn ‘anti-ensemble’ playing, while working on the piece by Bumšteinas, which means not to listen to your partner while playing together, contrary to what we have been taught to do all our lives. It was the first time we had to play in tune and out of tune at the same time. Isn’t that a paradox?

A. K.: Not to be guided by each other but by the soundtrack that triggers us to action. Lora and I couldn’t rely on our instincts but try to respond to what was recorded on the electronic soundtrack instead.

L. K.: The soundtrack was a kind of score for us. The ‘format’ of a classical musician, the whole system, in which we were educated, stipulates the contrary. Therefore we had to destroy that foundation, methodology, according to which we have ben schooled. Usually we don’t even question this, it seems natural for us to listen, coordinate and tune in with each other. And here we had to shift our perspective 180 degrees – that was a very exciting lesson for me.