Lithuania halts flights from UK over concerns about coronavirus mutation 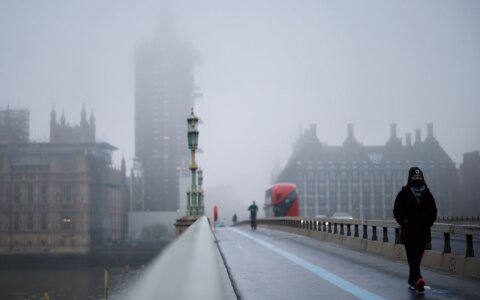 Lithuania on Sunday joined other European countries in imposing a ban on passenger flights from Britain, Prime Minister Ingrida Simonyte said after an emergency cabinet meeting.

The ban, in effect from 4 a.m. on Monday until December 31, came after Britain announced that a new fast-spreading strain of coronavirus appeared in the country. The Cabinet did not suspend flights from Lithuania to the United Kingdom.

"It's better to introduce restrictions now and then if we see that there's more clarity (...), it's easier to call off the restriction than introduce it too late," Simonyte told the Cabinet.

She said that Lithuania was coordinating its decisions with Latvia and Estonia, adding that "unfortunately, we still have no European decision".

The government's office said in a press release that it was a joint decision of the three Baltic states.

Health Minister Arunas Dulkys told the Cabinet that the measure was a precaution taken by many countries.

He noted that there was "no conclusive evidence to suggest that this strain of the virus is more easily transmissible or that it causes more severe illness", adding that there were no general recommendations from the World Health Organization (WHO) or other international organizations as to what action counties should take.

Transport Minister Marius Skuodis said that the government was not suspending flights to the UK.

"If flights will be organized or are scheduled to depart tomorrow (on Monday), passengers will definitely be able to leave, though we don't recommend doing that unless necessary," he said.

The minister advised Lithuanian citizens who are currently in the UK to stay there and not to try to find alternative flights to their home country.

"Given the decisions that are being made or have been made by other EU member states, they may face serious problems," he said.

While flights to the UK are not restricted, people may have problems leaving Lithuania, too, Skuodis warned.

"As to flights from Lithuania to the UK, yes, there may be some disruptions, because if a scheduled flight does not arrive (from the UK to Lithuania), then, naturally, it won't be able to leave either," he said.

Lithuanian Foreign Minister Gabrielius Landsbergis said that the three Baltic countries had taken a unanimous decision to suspend all passenger flights from the UK and were taking steps for better EU coordination of response to such emergencies.

"During the first wave in the spring, the EU member states made their own decisions, which has caused great chaos and uncertainty. We seek clarity for our citizens, united and coordinated actions. We ask our citizens to be responsible and stay at home. This is the only way to control the situation," Landsbergis said in a press release on Monday morning.

The Lithuanian, Latvian and Estonian foreign ministers called on the German presidency of the EU "to coordinate and make joint decisions on the situation with the United Kingdom, where a new variant of COVID-19 may have been spreading," the Lithuanian Foreign Ministry said in the press release.

The three ministers suggest "initiating a unified EU position on flights from the UK, possible closing and opening of the borders," it said.

Lithuania halts flights from UK over concerns about coronavirus mutation