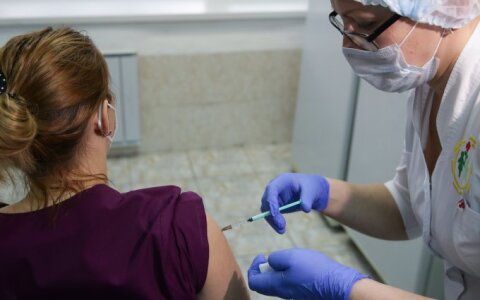 COVID-19 vaccines could be delivered to Lithuania a bit sooner but it would be a small number of dozes, Audrius Sceponavicius, the director of the Public Health Department at the Ministry of Health, says.

"Pfizer vaccines would be delivered first. It had been planned that the European Medicines Agency, which registers vaccines, would approve the vaccine only on December 30. But we were notified yesterday that it might probably be done on December 21 or 23, i.e., next week. (…) When the vaccine is registered by the European Medicines Agency, it will be distributed among European states over the next two to three days," the representative of the Health Ministry told the parliamentary Committee on National Security and Defense on Wednesday.

Related articles
Nausėda: majority of people in Lithuania could get coronavirus jabs by mid-summer
U.K. says it won vaccine race by being a ‘better country’

In his words, under the available information from BioNTech and Pfizer, 9,750 doses will be delivered to Lithuania, which is enough to vaccinate 5,000 people as two vaccines doses are needed. But incoming information is constantly changing.

Laurynas Kasciunas, the chairman of the NCSD, asked the Sceponavicius when other vaccine doses and their higher numbers could reach Lithuania, he said the schedule remained unclear across Europe.

"On Monday, fewer than 10,000 vaccines could probably be delivered to Lithuania, meaning that some 5,000 people could be vaccinated as two doses are needed. We want to, first of all, vaccinate doctors, and we have 40,000 of them. When are going to have a plan when the second, third stage will be and when are going to enter the most vulnerable public groups?" Kasciunas asked.

Sceponavicius said that "all countries have the same question on what the delivery schedule would be initially we were allocated a significantly higher number of vaccines".

"The preliminary vaccine delivery schedule is provided in quarters but it's hardly being followed. The issue will be raised by all countries today during the meeting of the European Council," the director of the Public Health Department at the Ministry of Health, says.

Lithuania wants to acquire enough vaccines to immunize 70 percent of its population. The country will likely have to buy much more doses than it needs to vaccine the entire population, but it will be able sell or donate unused dozes to countries outside the EU.