Russian troops in Nagorno-Karabakh ‘clearly a win for Moscow’ 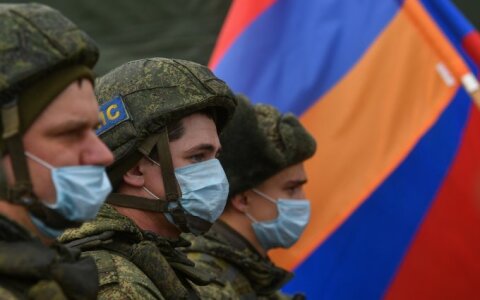 Nagorno-Karabakh—The Russian soldiers were in no mood to talk. At the bottom of a winding mountain road, where less than a week earlier Armenian and Azerbaijani forces had been locked in fierce combat, the squad had arrived earlier that morning to set up a new checkpoint on the outskirts of Nagorno-Karabakh’s regional capital, Stepanakert. Any attempt at conversation was met with impassive shrugs; attempts to take photos, with a sharp rebuke.

In the previous day or two, only brief flashes had emerged of this unprecedented peacekeeping force, deployed under a Russian-brokered cease-fire to halt six weeks of fighting in this breakaway enclave. One phone clip had shown the rear of a Russian armored personnel carrier crawling through the

Russian troops in Nagorno-Karabakh ‘clearly a win for Moscow’