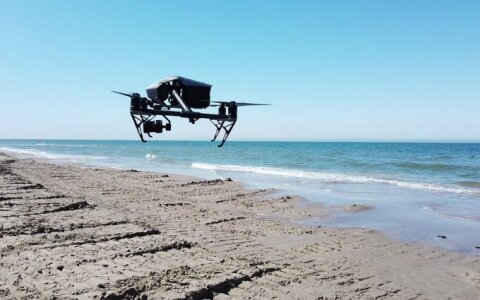 Consumer trends and the closed nature of the Baltic Sea are making the problem of plastic pollution in water more and more acute. Drones and satellite information will be used to more effectively identify areas of concern on the Lithuanian and Latvian coasts. After analyzing it, scientists will present their proposals for innovative pollution management measures.

During the warm season, summer vacationers notice situations where beaches are full of discards, consisting of marine vegetation, seabed macroalgae or water-flowering microalgae, usually blue-green algae. In the long run, such mass begins to emit an unpleasant odor, as well as making bathing pleasures uncomfortable. Higher levels of potentially pathogenic microorganisms are also observed at the sites of decaying agglomerations.

These "islands" of plant origin act like a magnet, attracting other floating particles in the water, including plastic. Scientists believe that collecting and removing these accumulations from water and beaches would have a multiple effect. “We would eliminate not only potentially excess organic matter to reduce eutrophication and harmful algae, but also a certain amount of plastic. We would also reduce the risk of human contact with pathogenic organisms - they can be transported for long distances together with plastic, ”notes the scientist of the Marine Research Institute of Klaipeda University, Dr. Arūnas Balčiūnas.

Lithuanian and Latvian forces are concentrated

Similar measures to reduce eutrophication are already emerging in other countries in the Baltic Sea region, such as on German and Estonian beaches. There are considerations in Lithuania to use them in smaller water bodies, but scientists still need to find out whether they would be effective in removing a significant part of plastic waste from the sea.

Will observe during flowering

In order to offer national, municipal and other organizations effective ways to fight plastic pollution, the first step is to collect as much accurate data as possible about the problem. Scientists plan to take samples in the water and on the shore, as well as to explore part of the Baltic Sea area with drones and satellites. The works planned within the framework of the ESMIC project will accelerate in the summer, when the most intense flowering of water is observed.

According to Dr. A. Balčiūnas, drones or unmanned aircrafts are increasingly used to monitor the environment and various processes - these technologies stand out for their economy and are rapidly improving, opening up more opportunities to collect and systematize relevant information. In addition, for more than a decade, scientists from the port city have been monitoring, evaluating and researching water blooming in Lithuania, and at the same time in the coastal region, using satellite data, which provides an opportunity to assess the situation on a larger scale.

During the ESMIC project, these technologies will be used on the coasts of Lithuania and Latvia in order to capture the accumulations of plant origin, and at the same time - the “hot spots” of the probable plastic pollution.

The information gathered during the project will not only be the object of expert research - in order to grow environmental culture, it will be introduced to the general public.

"Experts unanimously highlight that the only long-term way to reduce plastic waste is to recycle more, reuse it, and develop production from biodegradable materials. Various regulatory mechanisms and an advanced business approach alone are not enough - public education is necessary, because the habits of each of us have weight, and nature has memory, ”underlined Roma Stubrienė, Director of Klaipėda Science and Technology Park.

Scientists of Klaipeda University spread an important message about plastic pollution not only by consistently conducting various researches, but also in other formats. On November 16 The exhibition “Human Footprint in the Sand” presented in the port city, tells about the consequences that have lasted for centuries, which are often determined by the action that lasts only a moment - a cigarette butt, ice cream paper or currently mandatory disposable face masks.
Positive processes are making their way

"Considering today's circumstances, the volume of consumption and litter, we understand that the Baltic Sea will not clean up itself - complex measures are necessary for that. Nevertheless, we are observing positive processes - the public and private sectors are taking the initiative to initiate the much-needed changes, ”noted Dr. A. Balčiūnas.

It is noticeable that sustainability and scientific researches in this field are becoming increasingly important for companies in the manufacturing sector - as this is evidenced by the recent „fDi Intelligence award that reached Klaipėda's FEZ. The rating compilers noted the investments of PET and plastic sector companies in research and new solutions in the areas of chemical recycling, increased use of secondary raw materials and the development of the circular economy, as well as sustainability policies implemented by investors.