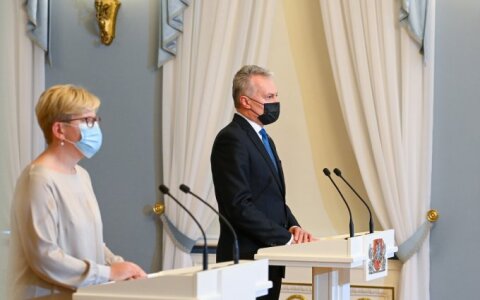 Lithuanian President Gitanas Nauseda said on Monday he has signed a decree to approve the makeup of the center-right Cabinet of Prime Minister Ingrida Simonyte.

"I have approved the newly formed Cabinet of Ministers (...) headed by Prime Minister Ingrida Simonyte," the president told a news conference.

"This Cabinet is taking office in a really difficult period for Lithuania and its top priority, urgent task will probably be to overcome the pandemic crisis we are facing now and to take very decisive and swift decisions that would yield immediate results," he said.

The Cabinet consists of nine ministers delegated by the conservative Homeland Union–Lithuanian Christian Democrats, three by the Freedom Party and two by the Liberal Movement.

"It is really ambitious and in line with the welfare state goals I am setting," he said. "I am looking forward to close cooperation in the future."

Nauseda said that all ministries will be important, but his focus will be on education, culture, economic well-being and social justice.

He said all the ministers met his requirements in terms of experience, qualifications and "decency and reputation".

The president welcomed the commitment in the government's program to "substantially" improving the education system "through solutions that are clear and understandable to society and by seeking national consensus".

"I do expect close cooperation with the heads of specific ministries. I believe we will maintain this contact throughout the entire term of office, because our initial contacts and our first meetings with the candidates were very constructive and business-like," he said.

The new government will take office after the parliament endorses its program and the ministers are sworn in.

Simonyte expects that the process will not take long.

"Time is a decisive factor now, given the COVID-19 situation and the need to approve next year's state budget and other budgets so that we can start next year smoothly," she said. "The government will have little time to make these decisions."