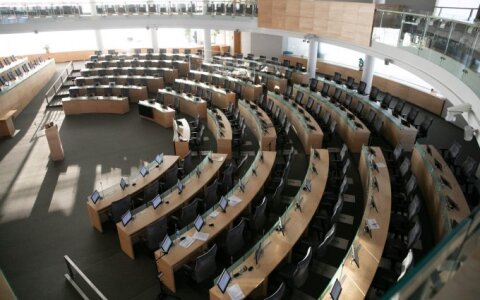 If the Lithuanian parliament passes new amendments to its statute, it could get ready for remote work by the end of December, Viktorija Cmilyte-Nielsen, the speaker of the Seimas, said on Thursday.

"All technical solutions should be ready in three to four weeks," she told reporters. "By the end of December, the decisions should be in place and we could fully switch to remote work."

The speaker expects the parliament to approve the new amendments.

In the meantime, the Seimas has taken all the necessary precautions against the spread of COVID-19, including offering lawmakers to get tested for the virus every week, Cmilyte-Nielsen said.

To her knowledge, nobody tested positive in the last round of tests on Wednesday.

Cmilyte-Nielsen noted with regret that only half of MPs agree to get tested.

The new amendments to the Statute of the Seimas, worked out by the parliament's legal and IT teams, would authorize the Board of the Seimas to organize virtual sittings and voting procedures under a nationwide state of emergency or lockdown when the parliament cannot convene physically "for obvious, objective reasons".

Among other things, the amendments would require live-streaming remote sittings on the Seimas website and keeping their video and audio recordings.

Parliamentarians would still have to convene physically for closed sittings or for the swearing-in of the government, high-ranking officials and judges.

The Board of the Seimas decided on Tuesday to use the Microsoft Teams platform for organizing remote work.

Last week, the Seimas rejected a proposal to minimally amend the statute to allow online debates during plenary sittings.

The parliament cancelled two days of sittings and went into the recess between November 25 and December 3.

It was said earlier that seven MPs had tested positive for COVID-19.