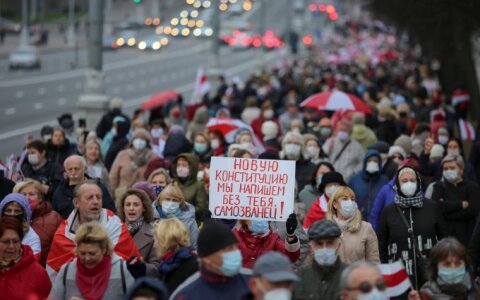 A victim of the Belarusian regime's force structures has asked Lithuanian prosecutors to launch a pre-trial investigation into torture and recognize it as a crime against humanity.

Such a complaint has been filed by Belarusian citizen Maxim Khoroshin who has recently moved to Vilnius from Minsk. The man claims he was brutally beaten by officers of the force structures loyal to the regime on October 13.

Khoroshin said he used to attend protests in Belarus with his wife. One day, three vehicles with 12 masked men arrived at his home and took him away. The Belarusian said he learnt from the officers that he had been under surveillance.

He says the officers accused him of taking part in an opposition rally and used bats and fists to beat him and that he lost consciousness several times.

Khoroshin told the press conference in Vilnius that he's still being persecuted and receives threatening calls.

"What is today happening in Belarus is really awful. If someone believes that something similar is happening elsewhere in the center of Europe in the XXI century, it's hardly happening. We do hope for major publicity and international assistance," Khoroshin said.

Giedrius Danelius, a lawyer representing Khoroshin, says such behavior amounts to torture and can lead to international prosecution.

"Such action is banned by international law, and the Lithuanian Criminal Code provides for liability for action that is banned by international law, specifically Article 100.3 that bans torture. From what Maxim told us, we see that he was tortured and that's being done by government institutions. We have filed a statement with the Prosecutor General's Office for an investigation to be launched," the lawyer told the press conference.

He underlined that Lithuanian law provides for criminal prosecution in absentia when a defendant is not present in Lithuania.

"We see that in this situation there's a real possibility to launch criminal prosecution over violations of international law and we believe it will be a good example," Danelius said.

He noted that Khoroshin recognized the person who beat him, therefore, a criminal case "is not only a declarative, political possibility but a clear legal possibility to prosecute such people".

The statement to Lithuania's law enforcement says that the person who beat the Belarusian citizen looked similar to Nikolay Karpenkov, the head of GUBOPIK (the Belarusian Interior Ministry's Main Directorate for Combating Organized Crime and Corruption).

"I am not ready to say yet that it was personally Karpenkov, but looking into a photo of this person, and also photos of other GUBOPIK officers, I am almost sure it was him. I can firmly say that I will be able to recognize this person. This man is over the age of 45 with bags under his eyes. He wore a black jacket, black jeans, black shoes. Based on the whole description, the person looks similar to Karpenkov," Khoroshin's statement reads.

Also attending the press conference, Alexander Dobrovolsky, a representative of Belarusian opposition leader Svetlana Tikhanovskaya's headquarters, said statements including similar accusations from other victims of the Belarusian regime would be filed with law enforcement institutions in other countries, adding that a coordination center for this task is being established in Vilnius.

"We are coordinating a group of lawyers from different countries who are preparing similar statements by people who are being protected by those countries. Criminal law allows for prosecution in many countries. Our plan is to have a nation's tribunal that should stop repressions. We will produce a single book of crimes and it would provide possibilities to report crimes, prepare materials for a criminal investigation in different countries to be launched," Dobrovolsky said.

"We plan to establish a coordination center in Vilnius that would coordinate the lawyers' work to stop repressions in Belarus," the adviser to the Belarusian opposition leader said.

In his words, similar victim statements on crimes against humanity will be filed with law enforcement in Poland, and are also being prepared in Germany, Belgium and the Netherlands.