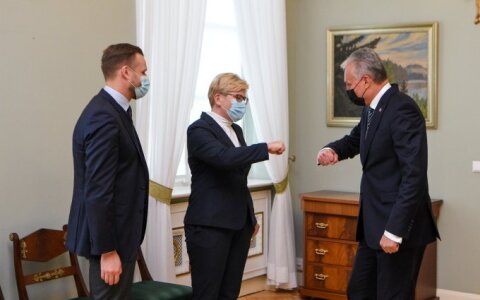 The full list of candidates for ministers, proposed by appointed Prime Minister Ingrida Smonyte, will not be confirmed, Lithuanian President Gitanas Nauseda says.

"I can only say that I already see that it will not be confirmed in full," the head of state told journalists on Friday, refraining to disclose which candidates would be rejected.

"I cannot say today how many names we are questioning as it would be irresponsible. All the more so, we have just started meetings with candidates for ministers," Nauseda said.

All candidates left an impression, the head of state said, but some of them have unclear visions and other have team formation problems.

"They left an impression, really. As I said before, the conversations were thoughtful. … We were well-prepared to provide all sorts of questions. Some of them were answered in full, and others not, unfortunately," Nauseda said.

"Some candidates probably still don’t have a very clear vision on what they are going to do for the next four years in their position. They need to do some work and have more input into the team formation," he said.

"Having considered all of this, we will make decisions, and today I wouldn't want to speak about the impression made by individual candidates," the president added, adding that decisions on ministers might be made as early as next week.

"We will definitely inform the prime minister before publishing the list of these ministers. I just don’t want to announce separate decisions on individual ministers. We will do that early next week when we will have met several of them," Nauseda said.