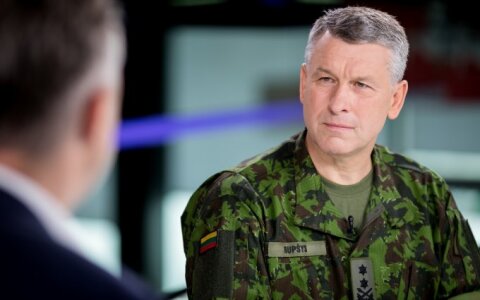 Lithuania's army chief says the search of a territory for a new military training area will be resumed, adding that the initially picked territory between Kursenai and Telsiai should be rejected, taking into account farmers' wish to preserve fertile land.

"We decided at the Defense Resources Council that we need a new study and look more widely across the whole of Lithuania, not only in Western Lithuania," Chief of Defense of Lithuania Lieutenant General Valdemaras Rupsys said in an interview with BNS.

A feasibility study was carried out earlier this year in search of a territory for that purpose in Western Lithuania. Under the selection criteria, around 20,000 ha would be necessary for a new training area for battalion-size battlegroup to be able to maneuver in this area and for tactical shooting training to be held.

Related articles
Lithuanian troops to be equipped with German pistols
Number of disinformation, cyber attacks is rising in Lithuania  (1)

Out of the nine potential territories selected, the possibility to establish a training area between Kursenai and Telsiai received major attention. The territory includes parts of Telsiai, Mazeikiai, Akmene and Siauliai Districts.

Some local residents, however, started protesting against such plans, worried that farmers' cultivated lands would be nationalized.

The army chief says that tactically this area would be suitable for a training area but the army understands that it would be hardly possible as the territory includes a lot of fertile land, therefore, will look for a new area.

"Tactically, it would be a good area. But I came to the conclusion back in late September that it's hardly possible as there's fertile land there and a lot of cultivated land. In late September, I proposed looking for other territories, not only in Western Lithuania," Rupsys said. "Soon afterwards, we all agreed at the Defense Resources Council that we need a new study and look more widely across the whole of Lithuania."

The general expressed his opinion that the reservation of these territories in Lithuania's general plan was not necessary, adding, however, that decisions are made by civilian authorities.

"Troops are well aware of the fact that land is a very valuable asset we left by our parents and ancestors, therefore, they will never stand against their own country's people and their interests. Of course, it would be ideal to find proper territories with state land that could be handed over to the Lithuanian army, or private, but not similar, land without major investment and it would be financially beneficial for the owners to sell it. It would be an optimum solution," he said.

The biggest military training areas in Lithuania are those of Pabrade and Gaiziunai. As the Lithuanian army is getting stronger and the number of allied troops is growing, the existing areas are no longer sufficient and their expansion is practically impossible.

As Lithuania started bolstering its armed forces in response to Russia's annexation of the Crimea, new military units were established in the west of the country and the country acquired IFVs, howitzers, air defense systems and bolstered anti-tank systems.