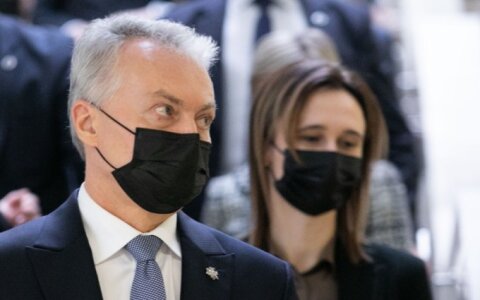 Lithuanian President Gitanas Nauseda identified getting the coronavirus pandemic under control as the immediate challenge facing the new government as he nominated Ingrida Simonyte for the post of prime minister.

"Today, it is our urgent task to join forces to contain the spread of COVID-19 infection," the president told the parliament. "We must work together to reduce the negative effects of the pandemic on the healthcare system and the economy, as well as on culture and other sectors most affected (by the crisis)."

"This will be the first task of the new government, but we must also look at the future of the Lithuanian state," he added.

"The country's long-term prosperity must be based on a strong foundation – consistently growing defense funding, an active foreign policy, strengthening of energy independence, and respect for the rule of law," he said.

The president also wants the new government to pay attention to "the creation of a green Lithuania" and innovations, provide more funding for research and development, and reach a national agreement on education.

"I am convinced that Ingrida Simonyte, the candidate for prime minister, as an experienced politician, sees the challenges facing the country and is ready to respond to them responsibly and competently," he told the Seimas.

Simonyte, who is not a member of any political party, was proposed to the post by the center-right coalition of the conservative Homeland Union–Lithuanian Christian Democrats, the Liberal Movement and the Freedom Party. The three parties hold 74 seats in the 141-member Seimas.