Parliament to hold sitting despite another MP testing positive for coronavirus 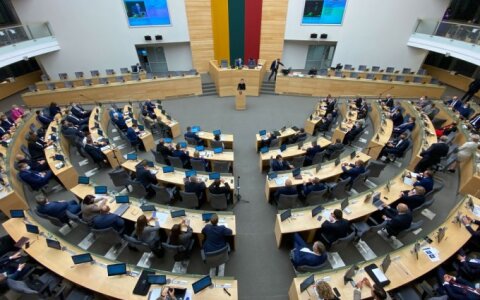 The Lithuanian parliament decided to go ahead with Tuesday's plenary sitting despite Liberal MP Jonas Varkalys having tested positive for COVID-19.

"I think it has to be held, because this is not the first (positive) case in the Seimas," Gabrielius Landsbergis, the head of the conservative Homeland Union–Lithuanian Christian Democrats' parliamentary group, told reporters after meeting with Viktorija Cmilyte-Nielsen, the speaker of the Seimas.

"Obviously, we are walking quite close to a dangerous line," he added.

Two conservative MPs who sat closest to Varkalys have been asked to stay home, according to Landsbergis.

The parliament is expected to elect four vice-speakers of the Seimas at the plenary meeting on Tuesday afternoon.

Landsbergis said additional safety precautions would be taken during the secret ballot.

Parliament to hold sitting despite another MP testing positive for coronavirus