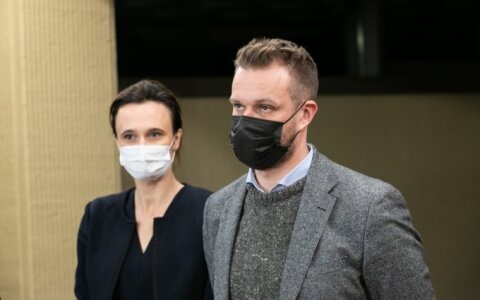 Gabrielius Landsbergis, leader of the Homeland Union – Lithuanian Christian Democrats, plans to lead the party's political group in the new parliament, meaning that he won’t probably assume any ministerial position in the new Cabinet.

"I plant to seek the group leaders' position," Landsbergis told journalists after the political group's first sitting on Friday.

The HU-LCD group plans to elect its leader later in the day when the new Seimas will officially start working.

There are no other candidates for the group leader's position, Landsbergis said. "There have been no other indications so far," he said.

Asked whether his pursuit of the group leader's position meant he would not join the Cabinet, Landsbergis confirmed that "not at the same time", adding, however, that "there have been discussions" on him leading one of the ministries.

The conservative HU-LCD will have 50 seats in the new parliament. Ingrida Simonyte, who led the party's candidate list in the recent general election, is being nominated for the position of prime minister by her party and the two liberal parties that joint the center-right coalition.