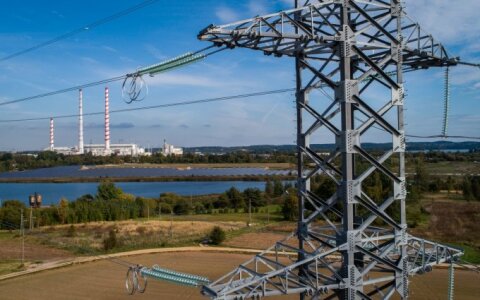 Lithuania's parliamentary Committee on European Affairs has called on the government to step up pressure on Latvia over electricity trade with Russia amid suspicions that power generated by Belarus' Astravyets nuclear power station could be thus entering the Lithuanian market.

It also proposes that the Lithuanian Foreign Ministry take over the talks on electricity trade from the country's Energy Ministry.

The Latvian-Russian border was closed to electricity trade with Russia under the 2018 methodology.

Latvia says that it starts applying a new trilateral Baltic methodology for electricity trade with third countries after Lithuania has halted trade with Belarus.

The methodology has caused controversy in Lithuania. It has been approved by the Energy Ministry, but has not been greenlighted by the National Energy Regulatory Council (VERT). The conservative Homeland Union–Lithuanian Christian Democrats (HU-LCD), the winner of last month's parliamentary election, has criticized the methodology, too

The methodology allows importing a certain amount of electricity from Russia, provided that it has "a proof of origin that the imported electricity is originated from non-Belarusian producers".

He says that it would be naive for Lithuania to expect a methodology that would not only bar access for Belarusian electricity, but also would also prevent Latvia and Estonia from importing Russian electricity.

The conservatives say the methodology proposed by the minister does not have enough safeguards to ensure that Latvia does not buy Astravyets electricity through Russian intermediaries. They say electricity flows need to be more strictly restricted and the certificate system must be more reliable.

Gediminas Kirkilas, chairman of the outgoing Committee on European Affairs, told BNS that the committee had approved the position unanimously.

Kirkilas, the leader of the Lithuanian Social Democratic Labor Party, said that the position would help draw Brussels' attention to the matter and that the Foreign Ministry's taking charge of the talks would allow voicing a more coordinated position.

MP Dainius Kreivys of the Homeland Union said that Latvia could be breaking its political promise not to buy energy produced at the Astravyets plant.

"Following the launch of the Belarusian nuclear power plant, an analysis of electricity flows shows that Latvia is successfully selling electricity entering Lithuania through the Lithuanian-Belarusian connection (...) in our market," Kreivys said.

"Lithuanian tax-payers' money is thus being used to finance the Astravyets nuclear power station's further development and, at the same time, Alexander Lukashenko's regime," he added.

The Seimas committee calls on VERT "to submit proposals on how to stop large electricity flows to Lithuania from Belarus in order to ensure that electricity produced by the Astravyets NPP does not enter the Lithuanian electricity market and that Lithuanian consumers do not pay for it through the Riga exchange".

The committee's position is not legally binding, but it is sending an important political signal.