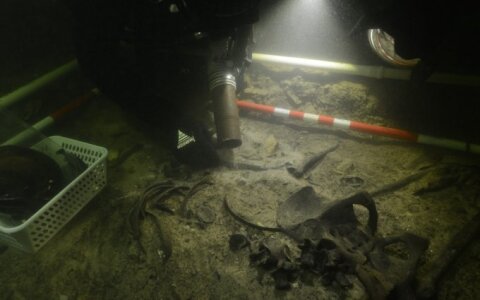 Archaeologists and divers have unearthed the remains of a medieval soldier from the underwater slope of Lake Asveja in eastern Lithuania.

The human remains were found under a layer of mud and sand at a depth of nine meters during an underwater examination of the remains of the old Dubingiai bridge, Elena Pranckenaite, an archaeologist, said.

She said the underwater find, which was not a burial, was unique and the first of its kind in Lithuania.

Personal belongings, including a sword, well-preserved leather boots and two knives, found nearby suggest that the remains belonged to a medieval soldier.

By analogy, the find can be dated to the 16th century.

Anthropologists have preliminary identified the remains as those of a young man whose cause of death could not be determined from the recovered osteological material.

The remains are now being examined at the Faculty of Medicine of Vilnius University, and the archaeological finds have been sent to the Lithuanian National Museum for conservation.

The bottom of Lake Asveja has been intermittently explored using underwater archeological methods since 1998.