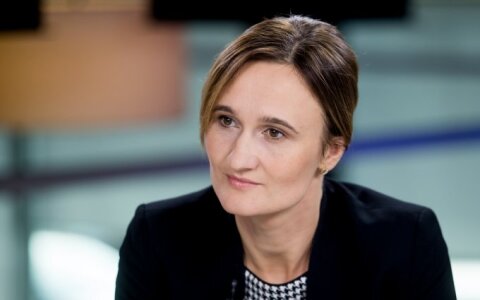 Lithuania's center-right parties, which signed a coalition agreement earlier this week, have agreed to nominate Viktorija Cmilyte-Nielsen, leader of the Liberal Movement, for the position of speaker of the country's parliament, the Seimas.

"We have received a decision by the board of the Liberal Movement, which in fact endorses the general negotiation progress, and that allowed us to agree on the second candidate for Viktorija Cmilyte-Nielsen to be nominated for speaker of the Seimas," Gabrielius Landsbergis, leader of the Homeland Union – Lithuanian Christian Democrats, told BNS on Wednesday night.

It has also been agreed that the Liberal Movement will get at least two ministerial positions and the Freedom Party will be allocated three, he said. Such an agreement was reached by the three parties on Tuesday.

Related articles
Karbauskis sees center-right coalition deal as too vague
Coalition agreement: what's been agreed on and where disputes are likely

According to Landsbergis, there's no agreement on the Seimas speaker's deputies yet.

The center-right coalition is also proposing Ingrida Simonyte, representing the LHU-LCD for prime minister, which is stated in the coalition agreement.

"It's simple mathematics as at the end of the day agreements and proposed people will be key," Simonyte said.