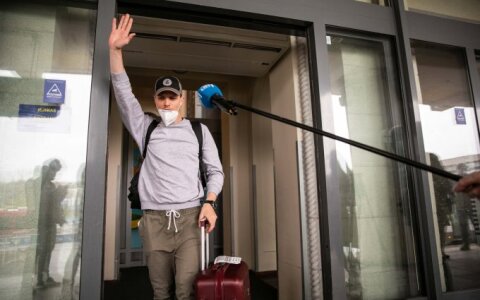 People coming from four countries or their parts on Europe's COVID-19 map will have to self-isolate in Lithuania as of Monday, the country's Health Ministry said on Friday.

The United Kingdom's constituent country, Northern Ireland, remains in the great zone alongside Lichtenstein, Slovakia and Switzerland. Arrivals from these countries will need to self-isolate for ten days or provide a negative COVID-19 test done no later than two days ago.

All remaining countries on the affect-country map, excluding "yellow" Norway, Finland and part of Greece, are in the red zone, including Lithuania.

The grey zone includes countries that do not provide data to the European Center for Disease Prevention and Control or fewer than 300 tests per population of 100,000 are carried out in those countries.

Third countries outside the EEA are also included into the grey zone and Lithuanian citizens arriving from them are required to self-isolate or provide a negative COVID-19 test.

Foreigners from third countries are banned from coming to Lithuania, with certain exceptions introduced by the Lithuanian government.

The new list of affected countries is issued on Fridays and comes into effect on Mondays.