Election watchdog to distribute over EUR 2.7 mln among political parties 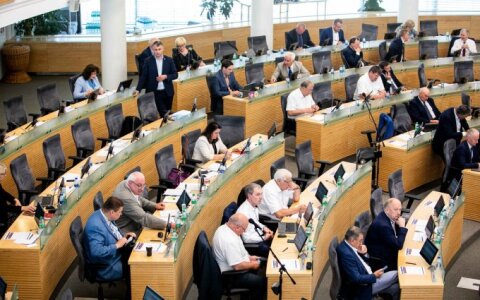 Lithuania's Central Electoral Commission is planning to allocate on Thursday a total of 2.751 million euros in state grants to political parties for the second half of 2020.

"What differs from the spring is that one party, the Order and Justice, is being liquidated," Lina Petroniene, head of the CEC Unit for Controlling the Funding of Political Parties and Political Campaigns, said during the commission's meeting.

"With one party under liquidation, eight parties will receive appropriations based on the votes received and one party (will get them) because it was established after the (2016) Seimas election," the official said.

The money was distributed among the parties in proportion to how many votes they won in the 2016 parliamentary elections and in the 2019 municipal and European Parliament elections.

The grants for the second half of 2020 amount to 0.6 euros per vote, according to the election watchdog.

The Lithuanian Social Democratic Labor Party was allocated 225,800 euros based on a different article of the law that allows providing public funding to a new political party founded after elections if it has a political group in the parliament.

State grants are transferred to political parties twice a year, on April 15 and November 15.

Election watchdog to distribute over EUR 2.7 mln among political parties