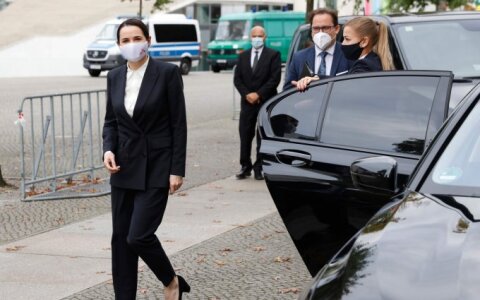 Belarusian opposition leader Svetlana Tikhanovskaya has raised the issue of relocating the 2021 IIHF Ice Hockey World Championship, scheduled to be co-hosted by Minsk, to step up pressure on Belarus' authoritarian President Alexander Lukashenko, her spokeswoman confirmed to BNS on Saturday.

"Tikhanovskaya met with the foreign ministers of Lithuania, Latvia, Estonia and Canada to discuss the international investigation into the Lukashenko regime's crimes, documenting of atrocities, assistance to human rights and media organizations, and support for athletes," Anna Krasulina told BNS.

"She also raised the issue of moving the Ice Hockey World Championship from Minsk to another location," she added.

The 2021 World Championship is scheduled to be co-hosted by Minsk and Riga on May 21 to June 6, with the key games to be played in the Belarusian capital.

In August, Latvia asked the International Ice Hockey Federation (IIHF) to consider assigning the status of main host to another country.