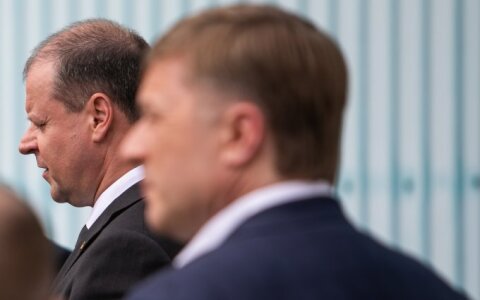 Lithuanian Prime Minister Saulius Skvernelis and Ramunas Karbauskis, the Farmers and Greens Union's leader, said on Tuesday that a center-left coalition could be formed after the parliamentary election.

"Yes, I do," Skvernelis told reporters when asked if he saw a possibility of forming a center-left coalition. "The second round may still change the results significantly."

"For a leftist coalition to be formed, we need people to go to the polls and state their position very clearly," he added.

Karbauskis said that his party is facing "a tough battle" in the October 25 runoff in single-member constituencies, "but the election will end only in the second round".

"It'll become clear then which side, center-left or right, has the majority," he added.

The Farmers and Greens' leader said no coalition negotiations are currently underway with any party, but center-left parties are holding talks to support each other’s candidates in the runoff vote.

"Obviously, the most important thing now is to rally support for center-left candidates," Karbauskis said.

"(A coalition is possible) if (voters') decision is favorable to center-left parties. The outcome of the election is far from clear," he added.

Skvernelis said that he was not disappointed either with the results of the Farmers and Greens Union, which came second in the multi-member constituency or with his own performance in the single-mandate constituency. 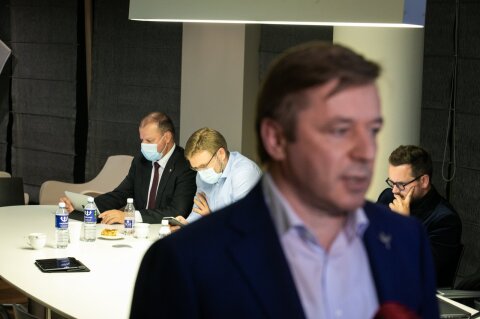 The prime minister received 14.5 percent of the vote in his constituency in Vilnius and will compete in the second round against Radvile Morkunaite-Mikuleniene of the Homeland Union-Lithuanian Christian Democrats who garnered 30 percent support.

"I believe that after four years in government and of work in rather difficult conditions, the (party's) result is not bad at all, and I hope it will be improved in single-member constituencies," Skvernelis told reporters.

"Very good", he said when asked to assess his own performance in the first round. "In Vilnius, I was probably the only left-leaning politician to make it to the second round."

Karbauskis retired that he would not join a coalition with the liberal Freedom Party, but he did not rule out holding talks with the conservative Homeland Union–Lithuanian Christian Democrats.

"We were probably the first to say that we could work with everyone who cares about Lithuania's future and is ready to continue our work," he said.

The Homeland Union came in first in the first round on Sunday, getting almost 25 percent of the national vote in the multi-member constituency where 70 of 141 MPs were elected.

The Farmers and Greens Union finished second with 17.5 percent, followed by the Labor Party and the Social Democratic Party with over 9 percent each.

The liberal Freedom Union and the Liberal Movement received over 9 percent and almost 7 percent, respectively, and other parties failed to cross the five-percent threshold to enter the Seimas.

Only three candidates secured an outright victory in their single-member constituencies in the first round, meaning that the remaining 68 seats in the Seimas will be decided in the run-off vote on October 25.