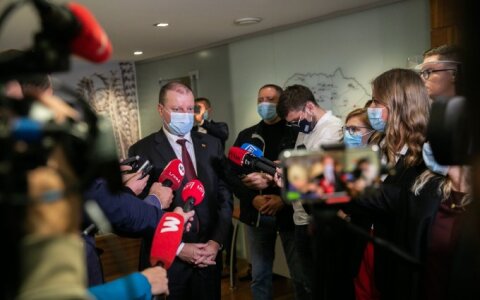 At 1am, Monday, the opposition conservative Homeland Union – Lithuanian Christian Democrats party has been leading in Lithuania's parliament election in the multi-member constituenc.

Announced by the country's Central Electoral Commission, the results from 1523 out of 1,989 districts show 19.90 percent of voters voted for the Lithuanian Farmers and Greens Union (LFGU), giving the party 18 out of 70 mandates in the multi-member constituency.

The Labor party, which failed to pass the election threshold in the multi-member constituency during the last parliament elections, is third with 11.46 percent (11 seats).

The opposition Social Democratic Party of Lithuania comes in fourth with 10.20 percent (9 seats), followed by the newly formed Freedom Party with 7.06 percent (7 seats).

The opposition Liberal Movement is above the 5-percent election threshold yet, with 6.27 percent and six potential seats in the Seimas.

The remaining parties, based on the existing results, are below the 5-percent threshold, with the Social Democratic Labor Party of Lithuania, part of the incumbent ruling block, the first below the line.

A total of 17 political parties nominated their candidate lists in the multi-member constituency.

Based on the existing results, the Electoral Action of Poles in Lithuania – Christian Families Alliance, part of the ruling coalition, would not get in to the new parliament as well, having received 4.82 percent of votes.

Results from polling districts showing up