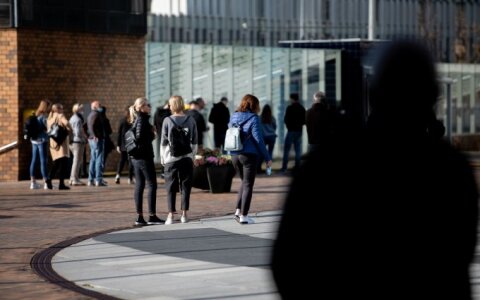 A long queue of voters lined up outside a polling station in Lukiskes Square in the center of Vilnius before its opening on Thursday – the last day of early voting in the general election due on Sunday, October 11.

Voters who arrived at approximately 7 a.m. had to wait for approximately an hour to cast their ballot whereas those who would come in the evening might have to wait twice longer.

Kestutis Girdzijauskas, a member of the Electoral Commission deployed to the polling station in Lukiskes Square, told BNS that queues outside the polling site formed before its opening and only dispersed after its closure.

The majority of those voting in the morning were the residents of Vilnius, he said adding that voters from Vilnius County and other cities usually increased in numbers towards the evening.

Approximately 2,000 voters cast their ballots at the polling station in Lukiskes Square per day, Girdzijauskas said emphasizing that voter activity in this election was the highest within his recollection.

Related articles
Nausėda: it's essential to ensure that voters can use their right to vote
More than 40,000 Lithuanians have registered for voting abroad

“Activity has been very high this year, most probably due to COVID-19 as people want to queue outside and not inside. We think that this is the reason. However, the general interest is also very strong,” he said.

This year, early voting in the general election has been extended to four days, instead of usual two days, due to the coronavirus pandemic and will continue until Thursday night. Voting takes place from 7 a.m. until 8 p.m.

Approximately 1.5 percent of voters cast their ballots during the first two days of early voting.

The Seimas election will take place on October 11.