PM's wife campaigning for Tamasuniene over her road paving effort 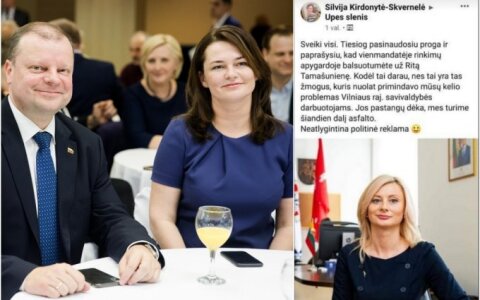 A copy of the prime minister's wife's post went viral on social media on Wednesday.

The prime minister's spokesman has not denied the authenticity of the post which he called a personal statement.

In her post, Skvernele asked members of Upes Street's community in Vilnius District to vote for Tamasuniene in the single-member constituency as "it’s a person who regularly reminded of our road problems to staff of Vilnius District Municipality".

"Thanks to her, we have part of asphalt today," Skvernele wrote in her post, marking it as unpaid political advertising.

The spokeswoman for Tamasuniene, representing the Electoral Action of Poles in Lithuania – Christian Families Alliance, says Tamasuniene, being a lawmaker elected in the single-member constituency, the minister has taken steps to improve infrastructure and has taken active steps for over a dozen of road sections to be asphalt-paved.

"Key matters voters turn to are related to the improvement of infrastructure (roads, sidewalks, lighting). Over the eight years of her working time, she has taken active steps to ensure asphalt-paving of over a dozen of road sections as improved infrastructure also improves the quality of life," Bozena Zaborovska-Zdanovic told BNS.

Skvernelis earlier came under fire for his government's decision to allocate funds for the asphalt-paving of Upes Street leading to the prime minister's house.

The Chief Official Ethics Commission concluded in June, however, it had no evidence to suggest that the prime minister had found himself in a conflict of public and private interests as the specific street was not mentioned in the government document.

Skvernelis has always maintained he had no influence on the Vilnius District authorities' decision to allocate funding for Upes Street's paving.

Tamasuniene was elected in Nemencine single-member constituency and is now also running for parliament there.

PM's wife campaigning for Tamasuniene over her road paving effort