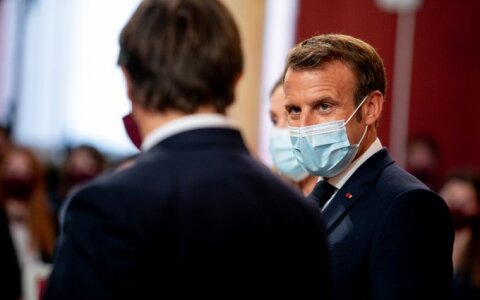 French President Emmanuel Macron believes that the Organization for Security and Cooperation in Europe (OSCE) could undertake a mediation mission in Belarus in coming weeks.

“We will call upon the Organization for Security and Cooperation in Europe and, together with German Chancellor Angela Merkel and European Council President Charles Michel, we would like to urge Belarus to agree to mediation by the OSCE,” Macron said during a discussion at Vilnius University on Tuesday, the second day of his official visit to Lithuania.

“Our goal would be to implement mediation in coming weeks as it is the only way to ensure a peaceful transfer of power and the release of political prisoners,” he added.

Attempts to resolve this crisis should be complemented by efforts to “develop a dialogue with Russia, to talk to Vladimir Putin,” Macron said.

“We have been saying since August that it would be a mistake and an unjustified provocation if Russia sent its military forces in. I think it is the issue of Belarus, and not its neighbors. We will work together with Russia and the international community,” the French leader said.

The French president also expressed belief that the European Union (EU) would impose sanctions against Belarusian regime for vote-rigging and violence against peaceful protesters in the near time.

“Europe is taking action, making pressure and we will approve sanctions in coming days or weeks and will thus make an impact on that regime, which is coming to an end,” he said.

Earlier on Tuesday, Macron met with Belarusian opposition leader Svetlana Tikhanovskaya in Vilnius and she later said that the French president had promised help in the pursuit of negotiations over the resolution of the political crisis in Belarus and the release of political prisoners.