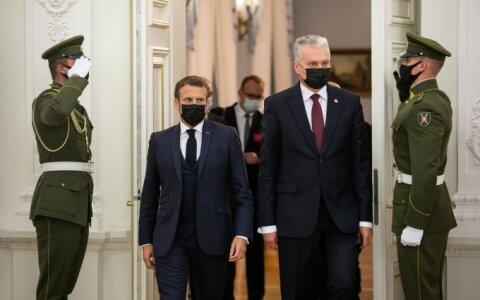 French President Emmanuel Macron arrived on an official visit to Lithuania on Monday.

The French leader is expected to pay close attention to the situation in Belarus during the first bilateral visit by a French head of state to Lithuania in nearly two decades.

Lithuanian President Gitanas Nauseda and Belarusian opposition leader Svetlana Tikhanovskaya, who has recently been staying in Vilnius, earlier called on Macron to play a mediating role in resolving the political crisis in Belarus.

Nauseda also plans to comprehensively discuss the relations with Russia during the meeting with the French president.

On the eve of his visit to Vilnius, Macron said that Belarusian President Alexander Lukashenko, unrecognized in the West, must step down.

The French president’s representatives reported that he was ready to meet with Tikhanovskaya in Vilnius.

On Tuesday, Macron will visit French troops serving within the NATO battalion in Lithuania and stationed in Rukla.