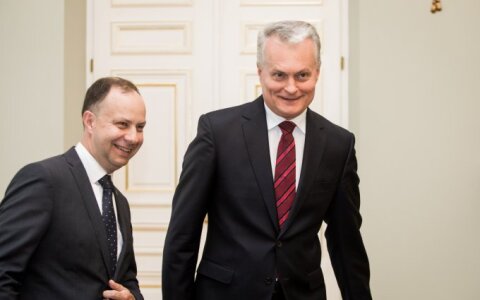 It shows that 64.7 percent of respondents now have a favorable opinion about Nauseda, up from 61.8 percent in July. Foreign Minister Linas Linkevicius came in second with 50.5 percent (50 percent in July), followed by Prime Minister Saulius Skvernelis with 47 percent (47.6 percent).

"It's important for the president that his rating has gone up slightly, not down, as it was going down during the quarantine, and now it stands at 64.7 percent, and was 61.8 percent, so it's an improvement," Vladas Gaidys, head of Vilmorus, told BNS.

Health Minister Aurelijus Veryga, however, has lost some of his popularity since July as now 30.3 percent have a favorable opinion about him, compared to 38 percent in July.

"Veryga's popularity has gone down after he shined during the quarantine. He now has 30.3 percent and was at a very high level of 38 percent. I would relate it to the start of the academic year, all problems and also with the growing number of infections," Gaidys told BNS.

Skvernelis came in second with 8.5 percent (10 percent in July), followed by MP Ingrida Simonyte, who will lead the opposition conservative Homeland Union – Lithuanian Christian Democrats, in the upcoming general election, with 7 percent (5.4 percent).

Matijosaitis ranks next with 2.7 percent, followed by Veryga (also 2.7 percent) and Speaker of the Seimas Viktoras Pranckietis (2.4 percent).

Vilmorus carried out the survey for the Lietuvos Rytas daily on September 4-12.