Nauseda calls Lukashenko's threats "a provocation" and warns about response 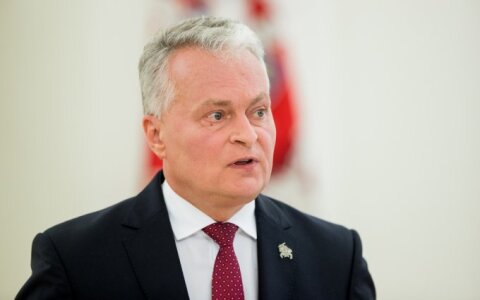 Lithuanian President Gitanas Nauseda has called Belarusian President Alexander Lukashenko's recent threats to close the border "a provocation", and also warned of a "mirror" response, if such a decision is made.

"I believe it’s a provocation without a specific basis. The authorities of some countries just forget that there's a mirror principle in international relations and borders can be closed on both sides," Nauseda was quoted as saying in a statement on Friday.

Lukashenko announced plans to close the borders with Lithuania and Poland on Thursday but Lithuanian border guards said earlier in the day cross-border traffic remains normal on Friday.

Nauseda discussed the situation in Belarus with his Polish counterpart Andrzej Duda and invited Poland to joint the Baltic states' sanctions for Lukashenko and officials of his regime.

It also stated that Lithuanian and Poland are both determined to urge EU member states to agree faster on pan-EU sanctions for Belarus.

The two presidents also agreed to meet in person in later November following the upcoming Seimas election in Lithuania and to mark the 500th birth anniversary of Grand Duke of Lithuanian and Polish King Zygimantas Augustas, known as Zygmunt II August in Poland.

Nauseda calls Lukashenko's threats "a provocation" and warns about response