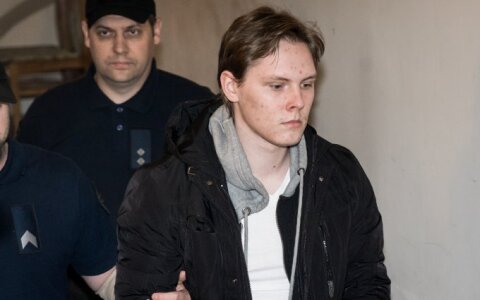 A Vilnius court sentenced on Friday a 21-year-old man who affiliates himself with a far-right extremist group to two years and four months in prison for an attempted terror act in the Lithuanian capital.

Gediminas Berzinskas has already spent almost a year in custody and he will have to serve another year and a half behind bars.

He was sentenced to three and a half years of imprisonment in a correctional facility for these crimes. Since the case was examined under an expedited procedure, the prison term was reduced by one-third.

Berzinskas, who has no previous convictions, admitted his guilt, regretted having committed the crimes, and helped establish the circumstances of the incident. The judge also noted that were was no evidence to indicate that his actions were aimed at causing human causalities,

Related articles
Attempt was made to carry out terror act in Vilnius  (1)
Border guards detain 70 kg of millions-worth cocaine, amphetamine

The public prosecutor sought a four-year prison sentence for the man.

Berzinskas was detained on October 15, 2019 as part of a special operation. He was charged with placing a home-made bomb outside a Western Union office in Vilnius and spray-painting "FK Division", "Siege" and a swastika on the building's wall on October 6.

Searches at his home found powerful ready-to-detonate explosives and other chemicals that can be used to make improvised explosive devices, as well as an improvised firearm and extremist and nationalist symbols and literature.

According to law-enforcement, Berzinskas affiliates himself with the far-right extremist group Feuerkrieg Division.