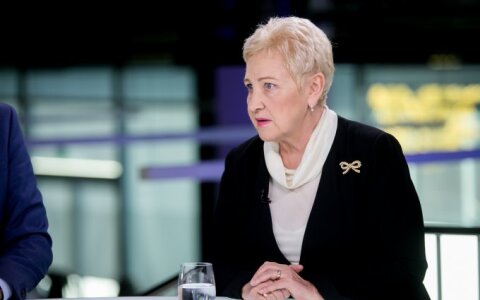 The Board of the Lithuanian Seimas has on Wednesday established a delegation of Lithuanian lawmakers who will take care of Belarusian affairs in Lithuania and, if possible, will travel to Minsk.

"It’s not a delegation for a visit to Belarus but if somebody comes to Lithuania, those people will need to take part in discussions on the Belarus issue," Irena Degutiene, a vice speaker of the Lithuanian Seimas, representing the conservative opposition Homeland Union – Lithuanian Christian Democrats, said during Wednesday's board meeting.

"We all understand that this delegation is for wider and more extensive work here in Lithuania," Rima Baskiene, the 1st deputy speaker of the ruling Lithuanian Farmers and Greens Union.

Related articles
Belarus: Baltic countries' statements matter 'less and less' to it
Lukashenko and 29 other Belarusian officials blacklisted in Lithuania

When establishing the delegation, members of the parliamentary board underlined that it was a political decision.

"I would propose establishing the delegation and not to have a lot of expectations that they will be soon travelling, but it would be important to have a political message, a political statement," Gabrielius Landsbergis, the opposition leader, said.

Kirkilas says the delegation is necessary, despite the fact that it will not travel to Belarus any time soon.

After protests erupted in Belarus following the presidential election in early August and the authorities launched a crackdown on protesters, Lithuanian lawmakers expressed their wish to go to Belarus and call on the regime of Alexander Lukashenko to come to the negotiating table with the opposition. But Lithuanian lawmakers later received a message that they were not welcome in Minsk and would not be allowed into the country.