Official: neighbors' position will be taken into account during Belarus discussions 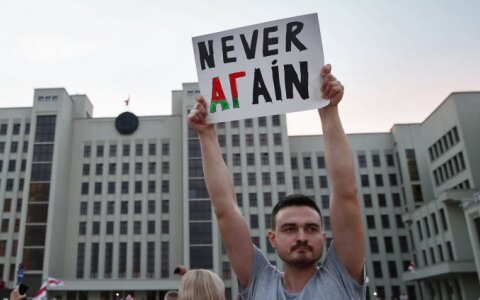 The positions of neighboring countries, including Lithuania, should be taken into account during the upcoming remote European Council meeting on Belarus on Wednesday, ex-Lithuanian Ambassador to the EU Jovita Neliupsiene says.

"When the Belarus issue or other issues are considered, related to Eastern European, Eastern Neighborhood countries, very often the position of neighboring countries and what they say is taken into account. So, I believe the position of these four countries (Lithuania, Latvia, Estonia and Poland – BNS) will be heard and really be taken into account," Neliupsiene, an adviser from the Strategic Planning Group at the Ministry of Foreign Affairs, told the national radio LRT.

"In most cases, the biggest discussions takes place around what measures should be taken and how strict sanctions should be," she said.

Related articles
Lithuanian parliament calls for non-recognition of Belarus' election
Conservatives move to blacklist Lukashenko, his sons and 36 other Belarusians

In her words, the EU can put political pressure on Belarus and impose sanctions. Currently, personal sanctions against responsible persons are under consideration.

Vytautas Landsbergis, chairman of the Lithuanian Supreme Council-Reconstituent Seimas, says he's in favor of sanctions for "the regime's servants". He called the EU's reaction sluggish and underlined that the goal is not only to remove President Alexander Lukashenko but also ensure real changes in Belarus.

Opinions on and insights into the events in Belarus will also be discussed during the European Council meeting, and the issue of possible sanctions will also be considered.

Lithuanian President Gitanas Nauseda plans to urge EU leaders to agree on the need to ensure peaceful handover of power in Belarus by means of a dialogue and hold new and fair and democratic elections.

Before that, Nauseda will have a conference call with his Nordic and Baltic counterpart. Yesterday, the Lithuanian president discussed future positions with german Chancellor Angela Merkel.

The Lithuanian, Latvian and Estonian parliaments and leaders condemned vote-rigging in Belarus, violence against protested and voice their support to sanctions for the Minsk regime responsible for these actions.

Official: neighbors' position will be taken into account during Belarus discussions