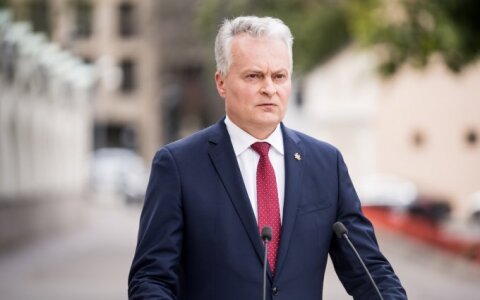 Alexander Lukashenko cannot be regarded as the legitimate president of Belarus because the presidential election was not free and democratic, Lithuanian President Gitanas Nauseda has told foreign media.

"We cannot call Mr. Lukashenko legitimate because there were no free democratic elections in Belarus," the president said in an interview with the British TV channel Sky News.

"Russia is interested to have a satellite state and Belarus would be probably fully integrated into Russia if we stay passively and just watch this process," Nauseda warned.

It is in the European Union's interests that Belarus is a "stable, democratic and sovereign" state, the president said in the interview which he gave on Thursday, according to his office.

Earlier this week, Nauseda offered to mediate in resolving the political crisis in Belarus together with the presidents of Poland, Latvia and Estonia.

If the initiative fails, then sanctions will have to be considered, he said.

Later on Friday, EU foreign ministers are expected to discuss possible sanctions against Belarus' officials responsible for vote-rigging and violence against protesters.