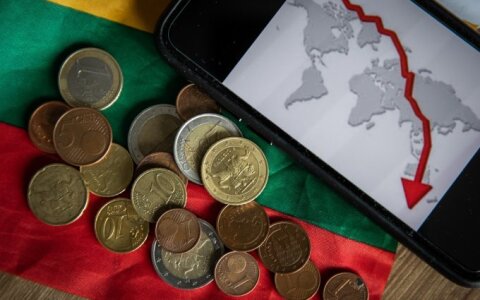 Lithuania's gross domestic product contracted by 3.7 percent in the second quarter of 2020 from a year ago to 11.5 billion euros at current prices, the country’s statistics office said on Thursday.

Quarter-on-quarter, the economy shrank by 5.1 percent.

"The second-quarter contraction was mostly due to services. Manufacturing had the second-biggest impact and construction was in third place," Jurate Petrauskiene, the head of Statistics Lithuania, told a news conference.

It can already be concluded that the economic crisis caused by the coronavirus was not as deep as in 2008-2009, according to Petrauskiene.

Related articles
Nauseda: Lithuania will have to go back to financial discipline after corona crisis
Lithuania gives the green light to large-scale investors with sweeping reforms  (1)

The country's GDP for the first half of 2020 totaled 22.5 million euros at current prices, down by a seasonally and calendar-adjusted 0.6 percent compared with the same period in 2019.

"This is a contraction, too, but insignificant," Petrauskiene noted.

The second-quarter GDP was driven down by declines of 2 percent in wholesale and retail trade, transport and storage, accommodation and food, 1.01 percent in manufacturing, and 0.95 percent in professional, scientific and technical, administrative and service activities.

The contraction in the manufacturing sector was mostly due to declines in textiles, leather processing, and oil product and timber trade. The construction sector saw a decrease in the residential building segment, according to Petrauskiene.