A third of Lithuanians say coronavirus crisis hit their finances 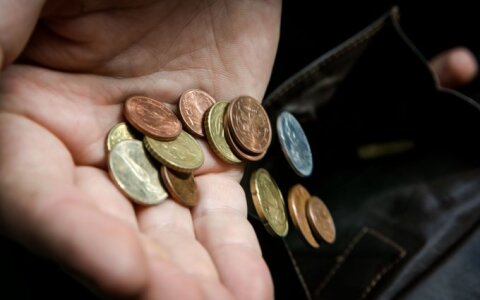 One third of the Lithuanian population say the coronavirus pandemic has adversely affected the financial situation, according to a survey conducted by the pollster Vilmorus for BNS.

Economists say people who lost income due to coronavirus quarantine restrictions on the economy were hit the hardest financially.

"The result should not be very surprising, because we have statistics that support it. Around 55,000 Lithuanian businesses, or roughly 40 percent of all businesses, faced restrictions after the quarantine was put in place," Vaidotas Tuzikas, the head of the Macroeconomics and Forecasting Division of the Bank of Lithuania, told BNS.

"We also have data on how businesses responded: a significant part of them placed their employees into furlough and paid them lower salaries," he added.

Justina Bagdanaviciute, project manager at Swedbank's Institute of Finances, says, however, that people whose working activities were restricted due to the containment measures do not make up 30 percent of the working population, which suggests that a significant part of those whose financial situation worsened during the quarantine period had unreported income.

"It is easy for employers to stop paying such envelope wages, because these workers are not protected by (employment) contracts," she told BNS. "These people could not expect help from the state either, because they did not pay taxes on their unreported income."

"No doubt, the quarantine affected incomes of those who could not work remotely, too," she added.

According to the survey, people aged 70 and over were more likely than other age groups to report no change in their financial situation, and less likely to report a deterioration.

People in rural areas were the most negatively affected financially, and those in Vilnius and other major cities and towns were the least hit, at 35.6 percent, 27.8 percent and 28.1 percent, respectively.

The exact results of the survey are as follows:

The question: "Has the coronavirus pandemic affected your financial situation?"

The survey involved 1,001 respondents aged 18 and over from 25 cities and towns, and 39 villages.

A third of Lithuanians say coronavirus crisis hit their finances