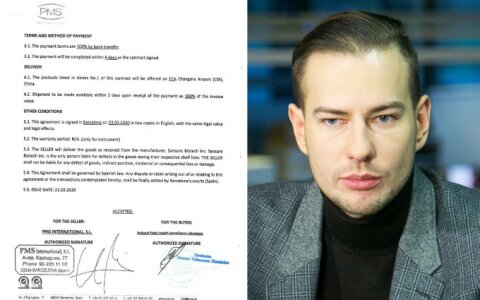 Sarunas Narbutas, the president of the Lithuanian Cancer Patient Coalition (POLA), is suspected of influence peddling in an investigation into a 6-million-euro procurement of reagents for coronavirus tests, the Special Investigation Service (STT) said on Tuesday.

The anti-corruption agency said in a press release that it was conducting searches and other necessary investigatory actions in various places in Vilnius on Tuesday.

Narbutas is suspected of acting as an informal intermediary between a foreign company and Lithuania's authorities that were scrambling to purchase a large amount of reagents after the coronavirus pandemic hit in March, according to the press release.

There is evidence that the suspect allegedly told the company's representative how much money he was to be paid for his intermediation in the procurement.

The investigation has found that more than 300,000 euros were transferred in several transactions into Narbutas' personal account after the procurement procedure was completed.

POLA is a non-governmental umbrella organization bringing together a number of oncology-related organizations.